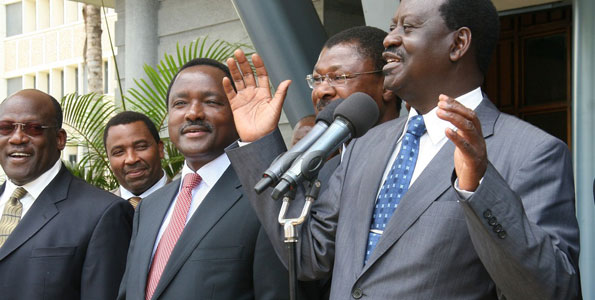 The official launch of CORD has coincided with two momentous events that will shape Kenya’s politics for decades to come. The first is that a historic 14.3 million Kenyans registered to vote, many of them travelling very long distances to do so. We know that the thirst for democracy in our country is unquenchable. At the same time, we are conscious that there are a few million others who were unable to register. That will never happen again.

The other event is the approval by Parliament of the first-ever Inspector General of Police, David Kimaiyo, who had been nominated by the President and the Prime Minister. These two events have eased many anxieties that Kenyans felt ahead of the election.

As all of us know, the upcoming election is the most definitive one of this generation. This is borne out by a level of politicking that is unprecedented in its intensity in our history. The stakes are very high but the choices are also equally clear. There are two political currents that are in contention, with diametrically opposed visions for the future of our country. One is CORDâ€™s, which stands for fundamental change emphasizing national unity, justice for all, and equitable distribution of our nation’s resources. The other side represents the status quo so deeply that it is mired in internal strife, unable to agree on anything except their distaste for those committed to reform.

Indeed, many leaders who were previously with the other side have already left after discovering there was no room for their diverse views, and that in fact there was little public support for the groupâ€™s ideology even among the people they claim to represent.

It is clear now from the figures just released by the IEBC that CORD will romp to the largest presidential victory of our multi-party era. We expect, given the level of support for our various parties, to win the presidential election with more than eight million votes, at least 160 parliamentary seats, and 29 seats each for governorships and the Senate. CORD will also win more than 30 women seats and gain the majority in more than 31 county assemblies.

But we urge our supporters to come out in large numbers since even this margin of victory will not ensure that we can push the legislative changes that Kenyans are demanding for a better life.
Ours is a completely open tent which has the capacity and desire to accommodate all Kenyans committed to justice, inclusion, growth and equity. We CORD partners ask you to join us tomorrow to celebrate the beginning of a national unity and prosperity anchored for full equality for all Kenyans and their counties.