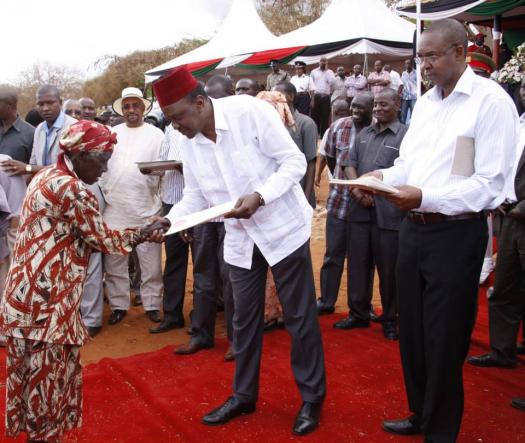 As March 4th approaches, the level of desperation of the handlers of the Jubilee Alliance Presidential candidate Uhuru Kenyattaâ€™s keeps rising up a notch by the second. There are allegations of â€œcookedâ€opinion polls, empty promises of land to squatters and at times openly playing victim (of the ICC trials) to attract sympathy of mostly the Mt Kenya Voters.

Hon. Beth Mugo, Minister for Public Health and Sanitation, a prominent member of the Kenyatta family is accused of hoodwinking squatters in Taveta with empty promise of land in exchange for votes.

Hon. Mugo together with her husband Rtd. Ambassador Nicholas M Mugo are said to own thousands of acres of idle land in Taita Taveta where they mainly conduct mineral exploration under their flagship company Beth International Aqua Mines Ltd.

Out of desperation to win Taveta votes for her first cousin and Jubilee presidential candidate Uhuru Kenyatta, Hon Mugo offered to donate 4000 acres of the more than 72,000 acres of the Kenyatta family land in Taita Taveta County.

Local leaders in Taveta dismissed Hon Mugoâ€™s offer as just hot air terming it a campaign gimmick, the Kenyatta family made similar offer in 2002 and the promise never came to fruition. Lawyer Stephen Odiago, who is vying for the Taveta parliamentary, termed the offer as a ploy to hoodwink locals to support the Jubilee presidential candidate Uhuru Kenyatta.

â€œIt is not true that Kenyatta family has donated land. It has always been an unfulfilled promise since 2002. The matter has been dangled for quite some time that the family will donate land,â€ the Mombasa-based lawyer said.

Former Taveta MP Jackson Mwalulu said he had never seen the said land. â€œI heard about the intention to donate land to the community but there has never been any implementation. I have never seen the land,â€ he said in an interview.

â€œThe Kenyatta family can successfully sue half of the Taveta population for trespassâ€, said Shaban Mcharo an accountant based in Voi.

It has been reported elsewhere by unverifiable sources though widely known to the public that Kenyattaâ€™s land may be little or more than 500,000 acres.