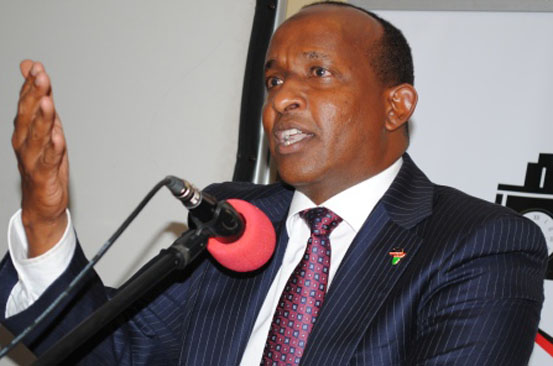 Majority leader Aden Duale got into trouble after he tried to lecture senior counsel  Senator Orengo on the legal process of impeaching DP Ruto. Duale is a graduate high school teacher of history and civics from Moi University in Eldoret, he also got a night MBA from JKUAT.

Of all things, mheshimiwa @Aden Duale, now you want to teach senator James Orengo law when you are not even a legal student! That's the mistake of taking an idler to Parliament. But continue to overreach yourself until the political parrot in you is tamed. Good luck!

😂😂😂He is getting confused the same way you confuse us when you re back home with your common phrase…"dowlada jubilee wa dowladanadi, william Abdi Ruto waa wilkanagi"

You had the same thinking when he took the presidential case to court, what happened?

What we can see hear is team tanga tanga trying to end their month with orengo so that atleast they get more than they used to get , now we know you guys kina murkomen na duale tuna wajua

Who misled our nation in the first place? @orengo_james followed you, where are the lists of AL Shabaab beneficiaries, sympathizes to date?

Duale posted the following regarding Orengo’s threat to impeach Ruto: He has failed to understand six important aspects of any impeachment process of the Deputy President or the President: –

1. The process cannot start in the Senate where he sits! Under Article 145 of the Constitution as read together with Art.150, the process can only originate in the National Assembly, where he does not sit!.

2. Under the same Article, The process can ONLY be initiated by a sitting Member of Parliament. The Constitution has no room for the strangers he is imagining he can sponsor to initiate the process.

3. Any MP wishing to start the process MUST have signatures of not less than a third of the entire membership of the National Assembly. In a House of 349, that translates to 117 MPs! That would be an uphill task for anyone- The idea will die even before it starts.

4. For such a motion to pass the second stage, it will require to be supported by two-thirds of all Members of the National Assembly. Getting 233 MPs to support anything is a political nightmare! We have tried it unsuccessfully more than 5 times in Bills to amend the Constitution.

5. Supposing that it passes that stage and the trial committee of eleven is formed. This is the Third Stage, where the Senate now becomes involved.

If the Committee was to find the grounds substantiated, the final stage is even harder- it requires two thirds of Senators to support! Third Stage is even harder! The motion will also require support of another Two-thirds of all Senators. In a House where Jubilee party enjoys super majority, that is definitely insurmountable. Our Constitution protects all Kenyans from cheap witch-hunt. My friend senator Orengo knows this too well, but he has chosen, once more, to market cheap and worthless fishing expeditions. He will not distract us from uniting our nation and the BIG 4 agenda!