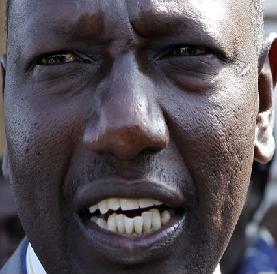 DP RUTO GETS HIS GOVERNMENT SPOKESMAN JOB BACK AS RAILA’S RETURN GIVES HIM A NEW LEASE OF LIFE
By Baraza LaJamii Ya Kenya
The Job of being the attack Dog in chief against Raila and government spokesman whenever CORD attacks the performance of the Jubilee “Collision” is now a preserve of deputy president Ruto.

Just even before Raila spoke at yesterday’s rally, Ruto with the help of moles in CORD had a copy of Raila’s speech and without wasting time he attacked Raila and CORD for proposing a National Dialogue.

Raila urged Uhuru to seek national dialogue in order to find solutions for the biting issues affecting this country and its citizens. To the surprise of many Ruto responded even before Raila raised the issue. At this rate for sure the dark forces will reinstate his Facebook page to enable him spread propaganda against Raila and CORD.

This is how low Ruto has gone…being allocated the job of attacking Raila whenever he makes any statement and be the government spokesman whenever CORD criticizes the performance of Jubilee “Collision” or worse still whenever government commits serious blunder.

Ruto has now come out of his hiding place rejuvenated with his extra teeth out darkening or is it shining and his tongue sharpened ready to attack Raila now that he is back in the country. All his responsibilities and powers have all been taken, but TNA has instead found something to keep him busy, defending Waiguru, defending any ills of the government and attacking Raila !

Indeed RUTO has resumed office as one Antony Oyugi puts it in his FB post today –having been on sabbatical with RAO,Ruto has officially resumed his office as Chief Government Parrot.he therefore requests Kenyans to send him their concerns about what happened during his sabbatical on the hashtag…#RutoWhileYouWereQuiet#