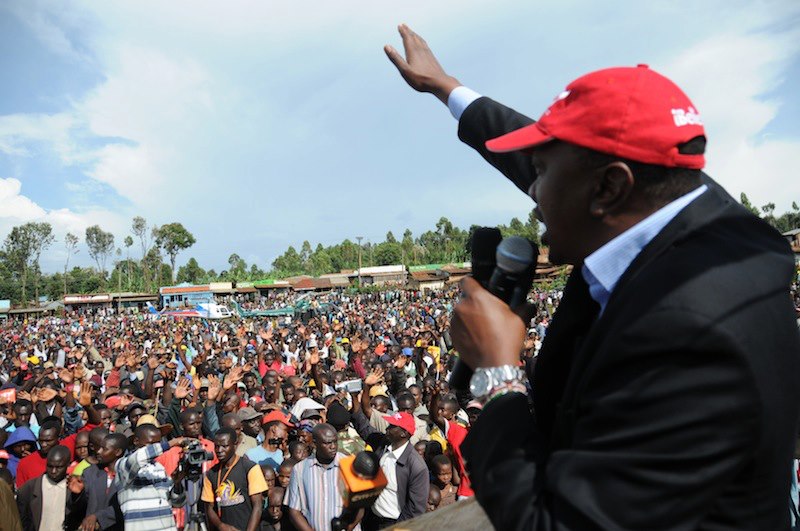 By: Isaack Nyakundi in Kisii for Kenya-Today.com

The tour of Kisii by Jubilee team was expected to be successful with no dram, It was the second joint rally by Uhuru and his deputy Ruto since their endorsement at Kasarani. The tour could turn dramatic as they met a hostile crowd that had many demands. Leaders who criticized Raila Odinga were booed and heckled.

A section of the crowd kept on chantingÂ  Molo Molo!!, computer error!!, Thika road!!, dollar!! in reference to the post election violence, skewed infrastructure development, Uhuru’s famous computer error and the plummeting of the shilling against the dollar during Uhuru’s tenure at the treasury that saw inflation hit record high of 22%.

A few youths kept on insisting that Uhuru highlight his record and not Ruto’s performance as Agriculture Minister, it is at this point that they started saying Jubilee with Ruto in the coalition is not welcome to Kisii until he apologizes for the 2007 atrocities. The Post election violence affected many Gusii community members most of whom were just poor farm labourers in the Kericho tea plantations.

What angered the youths most was the fact that the leaders had arrived in Choppers to avoid the poor state of roads in the area.

The region was the bedrock of Kibaki presidency but the developments during the Jubilee rallies is a clear indication that the ground is fast changing especially due to what the youths termed open discrimination against the Gusii IDPs who only got Kshs.10,000 whereas there Rift Valley (Kikuyu) counterparts got Kshs.35,000 and a parcel of land for resettlement.

It remains to be seen what reception Prime Minister Raila Odinga will get in his yet to be announced campaigns in the region.