File Picture: Former Prime Minister Raila Odinga in talks with Premier David Cameron in 2012. Uhuru Only shook hands with Cameron at the sidelines of the Somali Conference NOTHING BEYOND the conference! It was essential contact indeed!

President was received upon arrival by junior foreign office staff backed by UK’s spy agency MI5 and MI6 and Kenya’s High Commissioner to United Kingdom. The president was sneaked out of the airport via the cargo section- NOT the usual VIP section, he addressed no media at the airport!! VERY ESSENTIAL CONTACT indeed! 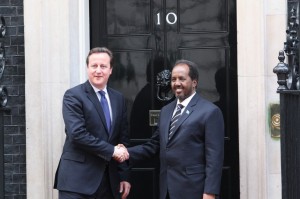 Cameron and President Mohamud of Somalia shake hands for the revered photo-shoot between visiting dignitaries and the British premier at No 10 Downing Street. There was no such thing for Kenyan who is largely responsible for bringing peace to Somalia.

WHY DID THE KENYA media spin otherwise? what is happening to mainstream media? propaganda machine??