There was drama in Mombasa when Changamwe residents intrepidly told the president to his face that â€œReferendum nayo ni lazimaâ€ Engrossed by the presidentâ€™s 1km motorcade, area residents of Portreize and Magongo cheered him as he made his way to Moi International Airport.

As tradition demands, the president has to make a brief stopover and respond to greetings from the local wananchi â€“ which he did. Despite the fact that the President and Mombasa governor do not sail in the same ocean, Kenyatta was mesmerized to see a gargantuan crowd cheering him, only to realize that they had a message for him.

No sooner had he began addressing the jubilant crowd, than the residents demanded for a chance to speak through their ombudsman, so as to convey their tribulations. The president couldnâ€™t resist the wananchi and he compellingly had to pave way for a local tout who was chosen as the residentâ€™s mouthpiece.

The tout was unafraid to spill everything before the president, from bad roads, hard economic times, the skyrocketing prices of basic commodities, insufficiency of drugs in public hospitals, insecurity mong many more. The stout, short, heavily bearded and fluent Swahili speaking tout spoke for a lengthy 5 minutes as residents cheered and chanted the pro-referendum slogans. 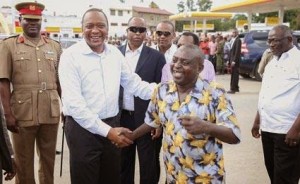 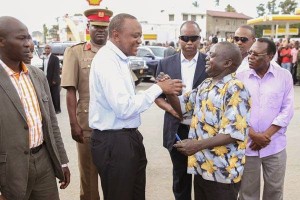 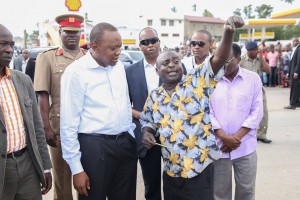 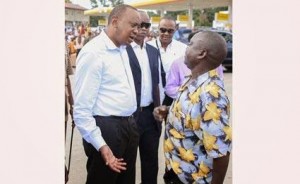 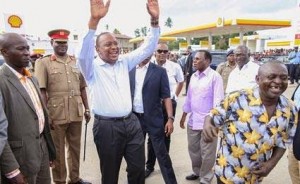