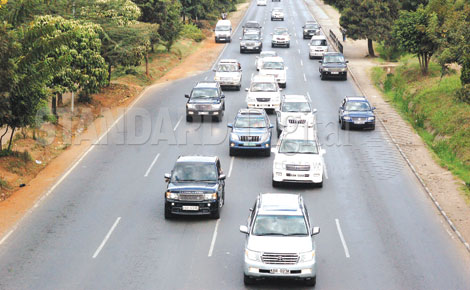 RAILA ODINGA’S super enhanced private security got top security chiefs talking at how efficient they sneaked him out of JKIAa and got him to Uhuru park with no hitch even as thousands lined up in the streets from the airport to jam packed Uhuru park.

While sections of leaders and journalists lined up at the VIP lounge of JKIA for a press conference shock came when they were told the PM was heading straight to Uhuru park.

The security details on the ground had earlier turned down an offer from the government who gave them a car to ferry Raila out from the airport. “We are very serious with his security and we had our own intelligence that’s why all measures were taken, we sneaked him out in a style we can’t reveal but it had to be done “says one of the elite local security attached to Raila who talked to Nairobi Exposed.

But all was not done yet,it had been planned that Raila would be flown to Uhuru park accompanied with 4 helicopters. Again another surprise was brewing helicopters were seen hovering around Uhuru park followed by the grand entry of Wetangula,Kalonzo,Muthama both whom entered aboard their cars,surprisingly in contrary to the protocol Raila was missing from the official principals convoy.

Shockingly when Muthama,Kalonzo, Wetangula rose to the podium, Raila mysteriously appeared to the amaze of everyone. No one saw him make an entry. Again he was sneaked in to the venue by his tactical team.

Developments coming at a time when assassination allegations have been made on Raila. His security looks revamped and not taking any chances

At Uhuru park all of the more 500,000 supporters were subjected to serious screening a keen to what the secret service do when the President of United States of America is to address a public function.

With this enhanced security the only thing need to work on is his branding and strategy execution.