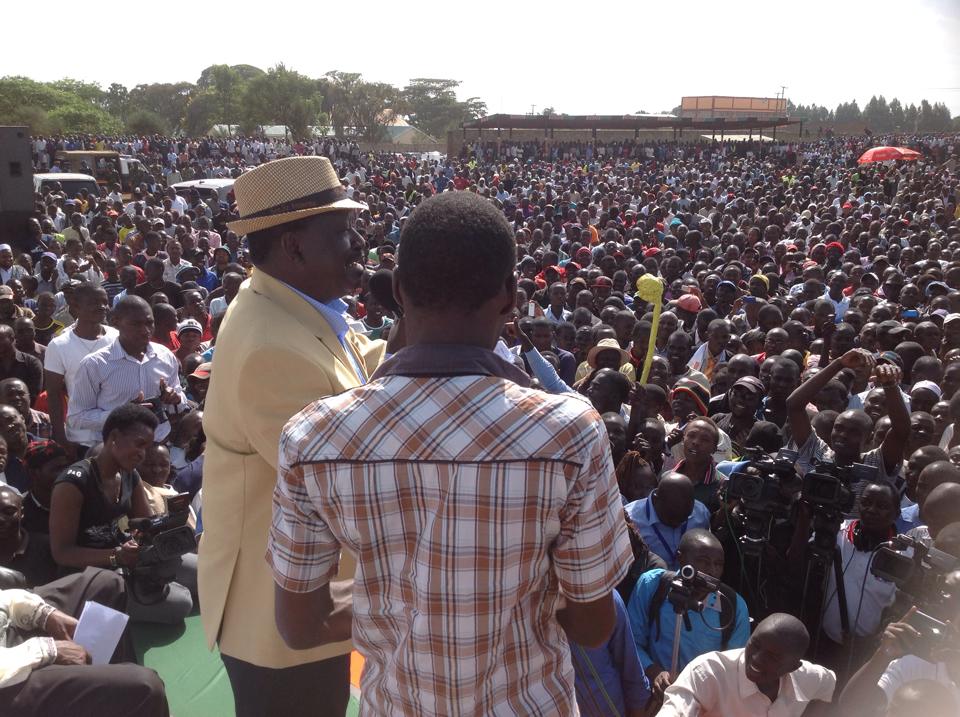 Word on the street is that Deputy President’s inner kitchen cabinet is agonizing following a successful CORD rally in their backyard. The town that is dominated by Kalenjins and Kikuyu pulled a cool +300,000 people in Eldoret 64 Stadium !

Thousands of locals abandoned their usual farming activities and walked long distance to the Stadium. Business in the town came to a standstill as former Prime Minister made his way to the stadium.

The stadium was filled to capacity, this comes as a surprise to Uhuru’s handlers since the town is considered a Jubilee, ealier in the week Ruto’s handlers led by the local governor banned the rally siting insecurity.

A resurgent CORD is now confident to move forward with CORD supporters from Mt Kenya region calling on Raila to hold a similar rally in the president’s Kiambu county to demonstrate that all Kenyans are united around the contentious issues afflicting them mainly insecurity and the ever rising cost of living.

Raila’s emphatic message that he was not interested in nusu mkate seem to have resonated well with a section of Jubilee supporters especially the Kalenjin nation most of whom have lost hope in the parasitic Jubilee regime.

Earlier the Cord principal Raila Odinga and opposition leaders landed in Eldoret Friday morning amid tight security, with the former Prime Minister criticising area governor Jackson Mandago for causing tension ahead of their rally at the 64 Stadium in the town.