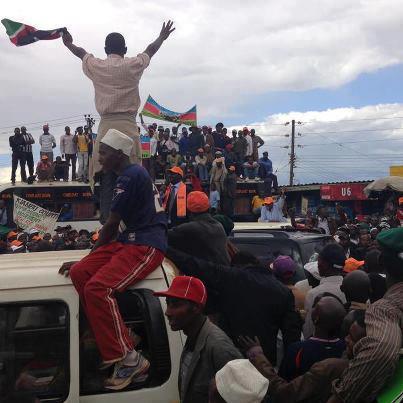 Business in Nyeri town came to a virtual halt today when Prime Minister Raila Odinga took his presidential campaigns in the County.
The premierâ€™s heroic reception got the business community by surprise after he showed up on foot with chanting supporters as he walked to selected venues to address the residents.
He said the Coalition for Reforms and Democracy (CORD) visit in the town was significant for the launch of the third liberation because was the epicenter of the freedom struggle.
â€œWe declare the beginning of the economic revolution that marks our third liberation struggle in this town where many freedom heroes started their quest for independence hereâ€ Odinga said.
He said the coming liberation will focus on economic transformation that will facilitate the realization of the Kenyan dream.
Odinga told residents that the coalition was planning to roll out an economic blueprint that was tailored to encourage investment and create a conducive environment for trade and development.
He said the plan recommends a review into the land policies to attract both local and foreign investors after it emerged that landlords had inflated the price of the factor of production beyond the reach of potential buyers.
The PM urged residents to reconsider adopting the land tenure system which the developed economies applied to break out of the poverty circle arguing that land consolidation was inevitable in wake of emerging cases of landless families.
He called on the need for a major revolution in the land policies to give room for commercial farming because subsistence agriculture was no longer viable.
The premier who was accompanied by leaders affiliated to the CORD said the alliance was mooted out of the common desire by affiliate parties to implement governance policies that could facilitated a double digit economic growth and more opportunities for employment
He also dismissed propaganda peddled by his political adversaries to the effect that his presidency was a threat to a certain communities in Central province due to the perception that he was likely to avenge historical grudges.
Odinga dispelled such fears and said the CORD was working with all the 42 tribes in the country and was committed to see majority of Kenyans crossed the poverty bracket and joined the middle income segment.
He called on the need for local farmers to explore ways of adding value and branding their produce to ensure that they remained competitive and attractive in the international market.
The Premier who was on a one day tour of the county was accompanied by Lugari MP Cyrus jirongo, and hisTurkana South counterpart Josphat Nanok.
Others were the leader of Mkenya Solidarity Party Maina Njenga, Businessman Peter Kuguru and the chairman of the CORD summit S.K. Macharia.
Earlier in the day the premier met the business community in the town at a Nyeri Hotel before meeting ODM party officials and supporters at Nyeri Catholic Cathedral.