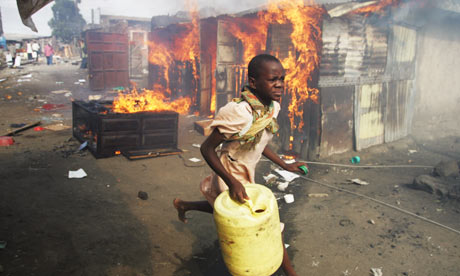 A few minutes ago I was thinking of the two Njeris. We used to just call them Njeri mkubwa na Njeri mdogo. They were sisters. They were our neighbours. Our friends.Then post-election happened.

I still remember that evening before Kibaki’s votes begun behaving anomolously. First the hundreds came, then the tens of hundreds, the thousands, finally the millions.

As Kibaki’s votes begun going up so were the tensions. Then I saw the vehicle come, then I saw Njeri Mdogo, then Njeri Mkubwa, then the mum. . .they all boarded; leaving the house they’d called ‘home’ behind.

For some strange reason they both smiled, waved, and as the vehicle left, I turned to mum, and she said:

“son, that’s the last you may see your friends. . .it is going to be worse from.”

Post-poll violence changed how we related. While our friends the next one week at the prisons, we could not go see them, or take to them food, or water, or warm clothes.

Then starvation. Then the first real people begun arriving.

I used to follow the riverside to get to town. The main highway was a death trap. The sight of a human being excited the police. The guns recochetted. . .bang! bang! bang!

When first arrivals of “our people” came. They confirmed those bitter stories. They were the walking dead. Been through hell.

At the busstop; I saw pale faces that had been cut days. Blood had oozed out till no more. People had come with what they could save, a woman clutched at the only thing that remained of her child- a hand-Mungiki had chopped it off after killing her three other children; given her the hand as a “trophy” to take to Raila.

There were stories of heads being used as roadblocks. Stories of the Maasais who had come to rescue. Of policemen who falsely led people to death dungeons. Bitter stories of men forcefully circumcised!

The more these stories were told, the more people got agitated. Even at the police station, kikuyus now felt insecure. Njeri and Njeri too. Soon buses would come and moved them to Kuria.

Njeri and Njeri: oh yes, we shall meet.