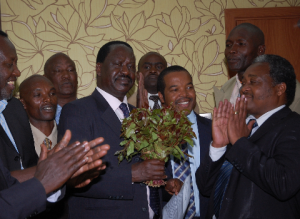 Uhuru Kenyatta who only few weeks a go claimed Kenya can do without Europe and USA now says miraa (khat) farmers need access to the Netherlands market to sustain basic livelihoods.

Uhuru condemned the ban on Kenyan Miraa by the Netherlands government, he urged the European country to rethink the decision and hold dialogue with miraa farmers as the decision affects them and millions of others.

He said the January 5 decision to ban miraa trade in The Netherlands had effectively dealt a big blow to a sub-sector worth Sh1.6 billion annually. The order by the Netherlands Secretary of State for Health, Welfare and Sports also directs that traders stop stocking miraa at Schipol Airport in Amsterdam.

The ban has already begun to bite. The Royal Dutch Airlines (KLM) has stopped airlifting miraa to The Netherlands, it is expected that the entire miraa cluster will be affected greatly.

With this pronouncements many will wait to see if Uhuru will continue with his anti West rhetoric or he will acknowledge that our economy cannot afford economic sanctions that will obviously plunge millions of Kenyans into extreme poverty.

Uhuru’s main challenger Raila Odinga condemned the ban last year when the Netherlands government adopted the proposal; he has previously promised to hold constructive dialogue with the Dutch government to lift the ban.

Additional reporting by the Standard.