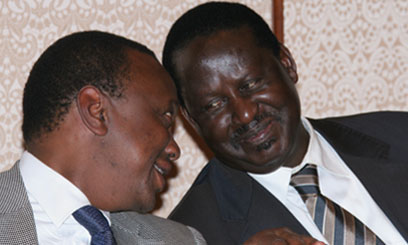 Smart Octopus’s poll generated online controversy immediately with Kenyans on Twitter labeling it a jack pot hunter kiosk pollster who is out for hire; there polls are very irregular, they poll whenever an order is placed with a complete draft- Irene Kemunto offered in a tweet

The poll “cooking” is alleged to have been done by Jubilee strategist, in a reaction to counter CORD. In the past two weeks CORD emerged tops with a clear win over Jubilee above the margin of error in the Synovate Ipso and infotrak harris polls. The poll manipulation is meant to hoodwink the public and neutralize credible polls done by Synovate.

The role of a well known TNA blogger in coordinating the media at the Smart Octopus press release was a pointer to whoÂ  is the master. A journalist who attended the media briefing said the whole poll was stage managed; Smart Octobus were reading the poll results whose green draft was written by Moses and Alfred, it is not secret that this poll is cooked, a prominent editor of a leading daily added.

The latest poll saga puts credibility of the pollster into question and serves no professional purpose than to peddle lies to the Kenyan public.