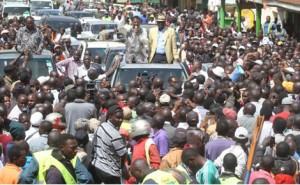 Comparing the crowds that gave Raila Odinga an amazing warm reception in Eldoret is like comparing DAY and NIGHT, it is clear who among the two shines most in Rift Valley.

Uhuru by allegedly sacking Kalenjins and replacing them with his own mt Kenya people has only served to alienate him from this important voting block.

Yesterday the Kalenjin clearly demonstrated that they are keen on Raila’s moves and that they think their interests are not well served in Jubilee. This puts strain on Deputy President who has worked hard to defend Uhuru’s move to sack Kalenjins.