NTV’s Sheila Mwanyigha Suffers A Major Wardrobe Malfunction, Exposes Her C@mel T0e Live On TV (PHOTOS). Once in a while we all suffer a wardrobe malfunction at some point in our daily lives whether you are an ageing celebrity in the WRONG SIDE OF 30 or as yound and fresh as a campus diva. Sheila Mwanyigha yesterday got caught up in a social media gaffe after posting a photo of her, alongside fellow presenter Kobi Kihara (who seemed pregnant to many) and Kenya’s fitness queen. You would think Kenyans would only see the faces of the three beauties who are past their mid thirties, oh no they picked up Sheila’s valva non linings or so called camera toe! 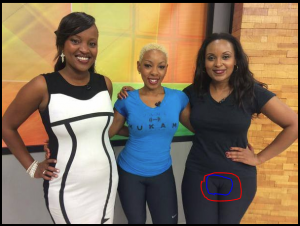