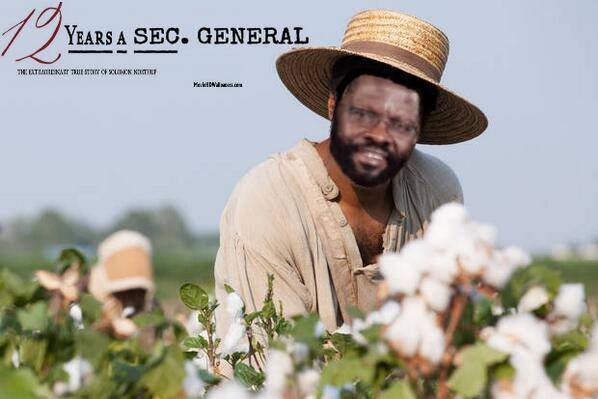 The Lesson is: If you stick to the truth, if you are reformist it might not pay off now, it could be your kids or grandchildren being blessed. Stay the course of fighting for to keep the forces of status quo and it will pay off some day.

Obama’s father was impoverished by Uhuru’s father, fired from Kenyatta government for being too close to Jaramogi and being smart, and for this he was treated like trash by Kanu. He eventually became a drunk and died a frustrated jobless man.

A baby born to parents in exile, Lupita is a product of the struggle for Kenya liberation. Prof. Peter Anyang’ Nyong’o was forced into exile by the repressive Moi/Kanu regime to Mexico where “Lupira” was born.

Moi thought he was breaking Nyong’o down as he toiled in the diaspora, but nay, his kids were getting international exposure, that has now played part in making Lupita a star.

An actor is a summation of all the human experiences of a person. For Lupita, it encompasses, Kenyan and Mexican heritages. And she is being described in Hollywood as Mexican-born. Its actually a better brand out here to be Mexican born, than being Kenyan born.

Her publicists and image consultants realize that positioning her as a Kenyan right now as ICC cases continue isn’t the best way to position her.

From Boston Globe, to Washington Post to New York times to the Huffington post, the local American newspapers and Hollywood bulletins I read, emphasize Lupita Nyong’o’s Mexican roots, and only mention Kenya succinctly.

And it has to do, with how much baggage of corruption, poor governance, misplaced priorities, gagging of media, rigging that Kenya has recently come to be known for.

And her publicists who are briefed to position her are keen to distance her from Kenya, if her brand is be competitive in the cut-throat Hollywood competition that features big names like Angelina Jo-lie, Kate Winslet etc. That shows you how the Kenyan brand has been defiled by the forces of status quo, read Kanu and its ideological successor, Jubilee.

You all remember anytime Obama’s opponents want to finish him, or they want to insinuate that he is not a straightforward man, they just throw in Kenya in there, and Obama digs himself out of a hole for weeks. That’s how much the Kenyan brand has become a baggage. Ask Obama, its expensive to get the Kenyan bad press off your backs. Why cant we just make our country one that we and the world would want to associate with?

The message here is to the sons of the struggle, there are lots of you:

Boniface Mwangi take heart, and keep the faith, your blessings are on the way. Makau Mutua, I know the Moi regime denied you a Kenyan Childhood, don’t despair in the trenches, Karma will reward you as it punishes your detractors. You kids might be the beneficiaries of Karma’s benevolence.

Githongo et al, it wont be long before God’s blessings come your way. Omtata, Ken Wafula, fear not, the forces of status quo can target your souls but your legacy, your sweat, your blood shall not be in vain. Your lineage will shine in the most high places.

And Raila Odinga; a man who has literally been in detention since his childhood, as his father was under house arrest; continues to be tracked down by the forces of Status quo.

Lets face it even to date Raila continues to be like a man imprisoned by the Kenyan dark forces. Some day, your offspring will shine and be an example to the world that it pays to be moral, and to be on the right side of history.

Look, Lupita as the highest paid actor right now, is making Billions of dollars, not shillings, without stealing a dime like Kenyans are stealing. She has probably overtaken Biwott, Kulei, Rwho sat comfortably as Nyong’o was incarcerated by Kanu. Kenyans, you dont have to steal to make it. Everyday we steal or elect, corrupt and indicted leaders, we are denting the Kenyan brand. Good day.