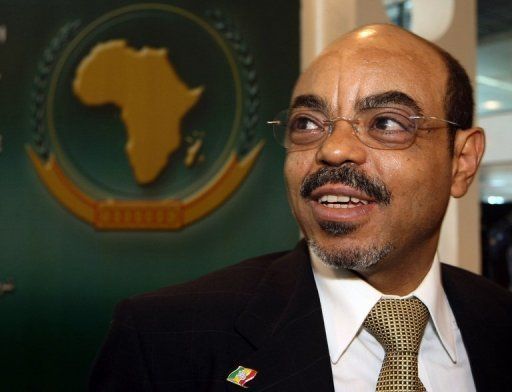 After seven weeks of denial by the Ethiopian Government on the whereabouts of Prime Minister Meles Zenawi, who many thought was admitted in a Belgian Hospital; the curtain has eventually fallen on one of Africaâ€™s strongman. Unconfirmed reports reaching Kenya-Today quoting the International Crisis Group (ICG) indicate that Meles Zenawi passed away two weeks ago in a Belgian hospital. Headquartered in Brussels, with offices around the world, ICG is the leading independent think tank on conflict prevention and resolution around the world. The source, intimated to us that it was hard to ignore such sensitive information from such a highly reputable international organization but sought out verify the veracity of the information.

Death has brought to a halt twenty-one years of despotic rule in the Horn of Africa. Zenawi, a former rebel who came to power in 1991 after toppling the bloody dictatorship of Mengistu Haile Mariam, set Ethiopia on a path of rapid growth and played a key role in mediating regional conflicts, but also drew criticism for cracking down on opponents and curtailing human rights.

Though the State media never disclosed the cause of his death, East African leaders and to big extent world powers that have interest in the region must be a worried lot on the future of Ethiopia and the stability of the Horn. Credit must be given to Zenawi on a number of fronts. Regionally, he has been the leading light in the fight against the Somali militia-Alshabab. He was immensely involved in mediating a dispute between Sudan and South-Sudan. In March this year, Zenawi, Presidents Salva Kiir and Mwai Kibaki of South Sudan and Kenya respectively, commissioned the construction of Lamu Port-South Sudan-Ethiopia Transport Project (LAPSSET) and the controversial Gibe III Hydro-electric Dam, which threatens Lake Turkana â€“ the world’s largest permanent desert lake and a crucial source of water for half a million people in Turkana County.Â The future of these projects lies squarely on the goodwill of the incoming government.

Questions still linger as to whether Ethiopia just like Ghana and Malawi can pull off a smooth transition. To start with, Ethiopia-Africaâ€™s oldest independent country with a population of over 90million is the second largest population after Nigeria. Since ascending to power in 1991, Zenawi has been involved in conflicts in Somalia, in the larger Sudan and border tussle with both Kenya and Eritrea.

Ethiopia has the largest number of troops in the greater Horn of East Africa and military sources indicate that it has the fourth most powerful military on the continent after South Africa, Nigeria and Egypt. Since 2000, Ethiopia has carried large-scale military operations in Somalia with close collaboration of the US oblivious of the repercussions of not getting prior authorisation from the Security Council. Reports indicate that through these covert missions against radical Islamists, the Ethiopian forces have helped liberate several towns including the capital of Hiiran region, Beledweyne and Bay, Bakool and Gaalgaduud regions.

Meles Zenawi and Isaias Afewerki of Eritrea have had no love lost between them after their two countries going through a bloody 30 year civil war that saw Eritrea secede. Over time, Zenawi has joined some East African leaders in calling for tightened sanctions against Eritrea. This led to sanctions being imposed on the Asmara regime in late 2009, in response to its alleged role in providing assistance to Al Shabaab.

Back at home, despite his regional mighty Zenawi has been an autocratic leader. He has ruled Ethiopia with an iron fist where any form of dissent is never tolerated and this has led many opposition leaders and media personnel flee into exile. His absence from the internal politics that he has controlled for over two decades will ignite a new wave of infighting inside the ruling Ethiopian Peopleâ€™s Revolutionary Democratic Front (EPRDF) that could have far-reaching ramifications for the Horn and the whole of East Africa.

The EPRDF is a coalition of four largely ethnically-based political parties, with the Tigrayan People Liberation Front (TPLF) representing Tigrays who make up less than five per cent of the population that run the show under the leadership of Meles and his government. The EPRDF coalition includes the Amhara National Democratic Movement (ANDM) created in the 1980s, the Oromo Peopleâ€™s Democratic Front (1990) and the Southern Peopleâ€™s Democratic Movement (SPDM) of 1992, all formed under the TPLF supervision. After the victory, power struggles emerged in the EPDRF ruling circle. Typical of any African ruler, Zenawi saw an opportunity and moved in to capitalise on it for his personal gain. He neutralised his political opponents and sought to consolidate his power.

Over the years, he has entrenched one party rule in Ethiopia. He was a resented man in his homeland Tigray-once his power base and by the Amhara elite (the other ethnic minority who previously ruled Ethiopia). The Oromo, who represent nearly a third of Ethiopiaâ€™s 90 million people, have for years agitated for greater freedom or autonomy, while the Amhara at nearly 20 million have been locked out of power. The Ogaden National Liberation Front (ONLF) is another active rebel group in the Somali region of Ethiopia fighting for independence since 1984. With the exit of Zenawi, the cohesion of this security and political structure will be at serious risk.

Whatever the case, Meles Zenawiâ€™s grip on power is over. The political dynamics will have to change permanently with his absence and the rise of competing forces for power and control. A vicious power struggle is bound to begin in earnest within the TPLF clique and its servant parties. Eretria and the Oromo on the other hand will be watching keenly on the unfolding events and the eventual transition. In the interim, the Deputy Prime Minister Hailemariam Desalegn (from the SPDM) will act as the countryâ€™s interim leader until Parliament elects a new leader according to the Ethiopian Constitution. For now the world will be watching to see if TPLF will pull this one off or end up in disarray.

Mr. Moturi is the Legal and Strategy Partner at Policy Options-Kenya, a political consultancy firm based in Nairobi.