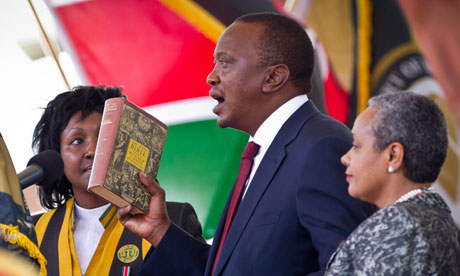 Reaping what we sow. I must admit that Kenya hasn’t moved any step further since Uhuru Kenyatta and William Ruto took over the government. I remember watching him via Aljazeera Tv make an inaugural speech and how he promised us heaven within a short duration. I never imagined that his first speech as a president could better work had we been in heaven by then. I hate the fact that even his supporters have come to notice that he was only building castles on the air.

How does Raila and Kalonzo view Uhuru Kenyatta? Do I even need to mention Eugene Wamalwa and Musalia Mudavadi? What about Kethi Kilonzo and his brother Mutula Kilonzo Jnr? What about those Ambassadors who were recently recalled from duty station? How does the Gusii, Luos, Luhya, Kamba, Kuria,Mijikenda, Samburu, Maasai et el feel about their president? Can somebody from that tribe happily welcome him to his area?

Why do most parts of the country feel they belong somewhere else? Am happy to realize that all of us will suffer during the tenure of president uhuru and ruto. This because we readily welcomed their leadership. We are reaping what we sowed. When did I start feeling that I hate to be a kenyan? Immediately devolution was on threat. Immediately teachers were taken to court. Immediately Cameron refused to take a photo with my president. Immediately opposition started getting threats from the government about the looming revolution. Immediately security personnel of Cord luetanents was withdrawn. Immediately uhuru took over leadership.

Five years is a long period for this government to be in power with the prevailing circumstances. Who is ready to suffer because of lack of vision of two guys. For how long shall we continue crying in social sites? How do our Jubilee leaders need to be addressed? Is it by word of mouth or action? I can attest that majority of kenyans are harvesting what they did not plant. It is time to say no.

The writer is an undergraduate Law student in India.