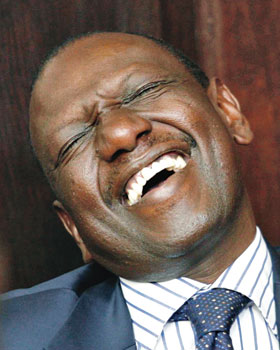 By Hon. Jim Bonnie
Whenever Ruto’s name is pronounced, horrific and dreadful memories are rekindled. This man Ruto, is a household name in the field of nepotism, discrimination, corruption, greed, mendacity, law breaking, post election skirmishes and in the court corridors.

For a man who edited his name to include “Samoei”, many thought that the real “Koitalel” spirit would be reborn in him. This was a fallacy.

This Moi orphan, while at the University of Nairobi, was a common figure in the christian union prayer halls. He spent a lot of time and energy singing and “crying” loud. In fact, comrades thought he will in future make a good preacher or a “Bishop” for that matter. In him people saw a real “man of God” – it was a false conjecture as it has turned out.

Moi, the tyrant, wasn’t asleep all this time. He closely monitored this CU chorister. I pray you don’t believe the “chicken business” bluff. Tell this tale to nincompoops. Moi later plucked this man with a “sweet voice” – still a fresh graduate, with the aim of harnessing his rich talent.

This self decleared “praise God” “angel” backslide – he was fascinated with money – and followed earthly rewards. He opted to join his “political mentor” – Moi, and the band wagon becoming “KANU yajenga inchi” choirmaster. Together with others, he led the Kanu youth wing where he robustly campaigned for Daniel Moi in 1992 and the subsequent elections. This is where he started minting riches.

Ruto never returned to church to carry on with his calling – that of singing alto – but instead, wore a new tag, that of a “politician”. From then, Ruto carried the curse of duping God. He was mislead by Moi. You will bear me witness that as long as you can remember, Ruto has been mentioned in atleast each and every scandal and vice in Kenya’s history.

He is habituated to corruption, deception, chest thumping, boasting……mention it. This “Kanu go- getter” and self proclaimed “hustler” – this trash is only mollycoddled by pedestrians from his village – can do anything for money. Something bamboozles him that he will one day become the president of this country. Unless in a movie.

During Moi’s autocratic regime, he was the “rubber stump” of corruption. When Waki envelope was enclosed, he added a medal to his store, by being one of the referred to a architects of 2007/8 PEV. In his tenure at the ministry of agriculture – under the coalition government, he “ate” maize. Maize meant for the holloi polloi.

This lord of impunity adulterated university education by imposing a rushed double intake program while at the ministry of higher education. Ruto has never achieved anything worth praises. No wonder he has to go “singing” in every funeral and village “barazas” his perceived achievements.

He used to organize rallies to explain to some hungry and desperate onlookers how and why is a “performer”. The current government knows very well that Ruto must not miss in the guest list of any function whatsoever; just because the “crybaby” doesn’t want to miss such golden opportunities to explain to Kenyans, with tears rolling, that they “won” the last elections.

He stage managed the ICC issue so as to gain sympathy from his Kalenjin ethnic community. He later “rewarded” them by “hawking” them like goats to the “willing buyer”. I bet the ICC subject is the only ghost that is certainly going to gulp him. His hurried proof of innocence at the preliminary stages during the pre trial proceedings not withstanding.

You comprehend that at present, he has lost relevance. He has no any “hot topic” like the “he took us to Hague” crap or “he is chasing our people from Mau” trash to yelp about. Instead, Ruto the the “performer” has resorted to complement Mrs. Margaret Kenyatta’s role of escorting Uhuru to airports and gatherings. I can do this only when i ha a mental disorder.

On Friday 28th June, 2013, the high court yet slammed a five million fine on him for stealing an IDP’s land. He was also mandated to vacaue the property forthwith. Don\’t forget the ICC was and has been following this case very closely with all the files of the case airlifted to the hague based court frequently.

I can assure you, you ain’t seen anything yet. Ruto being at the top of the government “eating chain”, he will swim in corruption and any other available “fruit” of impunity. The Kshs. 100 million renovation cost for the VP residence is part of the wider scheme to plunder public money.

He is a callous and incorrigible man who recognizes the smell of money even if it is hidden in a pit. In short, you can use Ruto as a “sniffer dog” to recover hidden money, as long as three quarters of the recovered cash will be his to pocket. Donge?!!