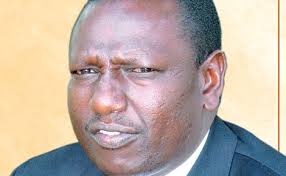 Deputy President William Ruto has developed a deep phobia for CORD leader Raila Odinga. As a result, the DP has unwittingly turned the PM into a subject of ridicule and sustained attack at all his public functions with some of his pronouncements bordering on juvenile insults.

The bare fact of the matter is, while the CORD leader has used personal initiative and his extensive global network of contacts to travel with and expose CORD governors, introduce them to potential investors, the DPâ€™s only foray overseas has been to the Netherlands, at the Hague to attend a criminal case. For this reason alone, any senior business executives sitting at any Western capital and watching CNN or Al Jazeera will be more inclined to do business with the CORD leader than the DP Ruto.

What should make the tax payer angry is that while the CORD leaders have traveled using their own initiatives and resources, DP Rutoâ€™s large legal team,security, personal aides and family have traveled first class to the Hague on tax payer account with their stay coordinated by official government diplomatic staff. A highly incriminating picture emerged last week of Ruto, his wife and aides queuing at a fist class check-in counter at a transit European airport.

Interestingly, beyond court appearances at the Hague and apart from constantly shadowing and idling around the president, DP Ruto has no known achievement as a highly paid and marketed deputy president with a humongous workforce under him at the Office of the Deputy President. Observers say the DP has metamorphosed into an expensive liability to the president than an asset, and is in the interim period merely being used as political insurance policy.

Additionally, DP Rutoâ€™s URP nominated cabinet and principal secretaries are operating in the background and unlike those of the TNA wing, URP are unheard of publicly. Most of them are known to visit Weston Hotel to plot how to cut deals that will finance their 2017 comeback. And to make matters worse, URP governors, save for Bometâ€™s Isaac Ruto and Kerichoâ€™s Chepkwony, are at total loggerheads with devolution with no development or investment agenda during the time they have been in office.

The URP party itself has not held any parliamentary or gubernatorial joint group meeting to undertake to review strategy or assess short-term positions on various public issues. To them, a political party is merely a vehicle to negotiating tribal coalitions and ultimately to power and needs not to have any ideology.

This is where the CORD leader beat DP and URP leader hands down. The CORD leader has been denied pension by the Jubilee government, is constantly ostracized as an election loser and also always being politically undermined by the Jubilee duo, led by DP Ruto. Yet, he still has managed to lead a coalition with the closest semblance to a working political party, as well as led investor initiatives. The former PM currently spearheading in plans to organizea constitutional amendment aimed at strengthening devolution, amongst others.

On the other hand, the flagship projects of the Jubilee coalition harmonised manifesto have effectively stalled, with its leaders having shifted goalposts and are now talking about maintaining a status quo from what they inherited from the grand coalition government. DP Ruto has made it his business to blind followers with unhelpful weekend harambee rituals where millions of shillings from unexplained sources are endlessly donated.

To any potential development partner, even outside government the PM appears a more viable prospect than the DP. In any case their records are world apart. By targeting the PM, the DP hopes to build anti-CORD sentiments and therefore hide his own failures.

The DP must learn to be DP for all Kenyans and avoid being quirky, abrasive and exceedingly condescending. He must start to work to attain pre-election promises and deliver services to all regardless of political affiliation. He is otherwise orchestrating his own downfall by courting an impeachment motion, let alone prospecting for a one term only.