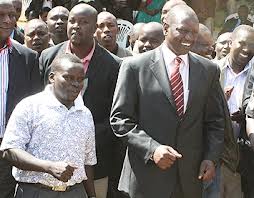 It can now be revealed that Joshua Arap Sangâ€™s frustration emanates from his personal stand and principle to confront the allegations against him with stubborn facts. Many will agree that Sang, a former popular radio presenter was a surprise inclusion in the famous Ocampo six.

Life is not easy with a tag of “ICC suspect, now the accused”, Sang was forced to learn quickly how to live with his new status, he developed a good rapport with his co-accused William Ruto. This may have been made easy by the fact that both are young, come from the Nandi community and above all they are born again Christians. Pundits agree that it was Sang who in a sense made Ruto what he is today in the Rift Valley, using his prowess in radio broadcasting.

Soon after the exit of Mzee Moi from the political scene, a big vacuum was left that was hard to fill. They say, it was Sang who stood in the gap through his radio showÂ Le nee emet until William Ruto came along. Again, it was Sang who endeared Ruto to the masses by carefully and cunningly weaving Kalenjin issues around the leadership of Ruto through his popular radio show.

Without Sang, Ruto would not be enjoying even half the clout he currently wields.

The chemistry between Sang and Ruto saw him attend high profile meetings especially the infamous prayer rallies for the Ocampo six (Muthaura and General Ali did not attend most of the meetings). In literal sense, Ruto adopted Sang as his son. You could always spot him wherever Bill was.

The warm heart exhibited by Ruto towards Sang is not new among the Kalenjin community. Traditionally, it is normal to adopt a baby from a poor family or even support them – remember Moi had many of such adoptees. The chemistry went even a notch higher when both Sang and Ruto adopted a similar strategy – they picked on the same counsels, with Katwa Kigen as their lead counsel at the ICC.

Around the same time, Rutoâ€™s relationship with Raila Odinga was getting increasingly strained owing to among other things, the Kibaki led bureaucracy continued detention of the youth from the Rift Valley alleged to have been involved in post election violence. It is worth noting that Raila appealed for the unconditional release of the youth, but, Kibaki with his then powerful constitutional minister Martha Karua declined leaving Raila a frustrated man.

Rutoâ€™s quest for power and influence accelerated his parting of ways with Odinga. Ruto was getting frustrated by the fact that the ODM side of governmentâ€™s 50% was being sidelined in key government decisions. And, with ODM sticking to the partyâ€™s hierarchy that put Musalia Mudavadi ahead of him in party and government affairs, Ruto led a rebellion in his party.

Suddenly, Ruto became a darling of the powerful Mt. Kenya clique though he knew very well that it was the same clique that got him in the Ocampo list. To Ruto, if you canâ€™t beat them, join them! And there he was working closely with PNU side.

That is where trouble started!

Sangâ€™s approach is to use the way of truth to exonerate himself from the allegations leveled against him by the ICC. Ruto took the political way of manipulating the electorate to demonstrate to the ICC that the two feuding tribes can live “happily ever after” joining Jubilee Alliance. However things are not working as per Ruto’s strategy, it is a well known fact that Ruto’s ICC case was a set up by Uhuru Kenyatta/Kibaki controlled NSIS, Martha Karua and some NGOs.

Of interest is the systematic vanishing (never to be traced) ICC Prosecution witnesses who were to testify against Uhuru Kenyatta, the ICC prosecutor has admitted that Uhuru case is difficult since the Kibaki government has failed to give incriminating evidence against Uhuru, whereas the evidence and witnesses against Ruto are intact, there are signs that the government is cooperating to ensure Ruto is jailed by the ICC.

The Hypocrisy of the Kibaki government (controlled by Uhuru) is what Arap Sang is protesting about, he believes once Uhuru is elected president the regime will compromise the countryâ€™s ability to address long term issues as captured in agenda 4 of the Kenya National Dialogue and Reconciliation Frame-work.

Sang confirms Raila Odinga did not scheme to take the Ocampo six to The Hague. Railaâ€™s role in the attempts to set up a local tribunal is well documented. However, Ruto chose to settle scores with Raila at the expense the hague trials unknowinglyÂ  and this is set to affect the resolving of historical injustices in Rift Valley if Uhuru wins the March 4th election.

Owing to Rutoâ€™s closeness of convenience to the Mt Kenya mafia, it was decided that the Ocampo sixâ€™s legal and travel expenses will be taken care of by the government of Kenya. It was agreed that each of the Ocampo six will get KShs 50 million. Sangâ€™s share of the fees was passed on to his new found friend and god father Ruto. This was done in the belief that Ruto is a trusted friend to Arap Sang.

A Source close to Sang revealed that Ruto did not pass all the cash (legal fees and travel expenses from the government) to his good friend, brother in Christ -the adopted son, co accused. Sang only received 2 Million of total the 50M. Ruto later stopped answering Arap Sang’s calls.

A few weeks to the ICC status conference held on February 14th, with time running out, Sang decided to go to Ruto’s house to seek part ofÂ  the remaining 48M to facilitate his travel to the Hague. TheÂ  guards at Ruto’s Karen home could not let him in, Sang scrapped around for cash and traveled! to date Ruto has neither paid the 48M nor answered his calls. And that is betrayal by a brother, godfather and brother in Christ.

Sang is reported to be preparing for a press conference to set the record straight. He will also use the opportunity to explain his decision to endorse CORDâ€™s Raila Odinga for the presidency, and Mt. Kenya mafiaâ€™s tricks on Ruto, the Rift Valley people and the Kenyan electorate.

We can only hold our breath as this dramatic story develops. Will Arap Sang’s magic words that made Ruto King tilt fortunes this time and safe Ruto from the Mt Kenya Clique? Well, we can only wait but going the ground mood, the Kalenjin are steadily moving to CORD.