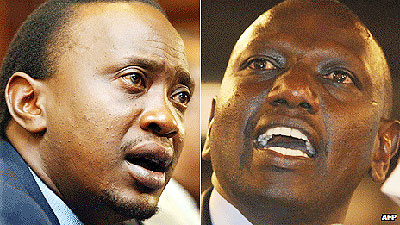 A Kalenjin caller to one of the vernacular radio stations once said they need to support Jubilee because “Uhuru ni mtu ya kanywaji”, and so their son would be running the Jubilee government.

Well, thanks to treachery, WSR is now a man atop a hill. Due to Uhuru’s ineffectiveness, Ruto is fast emerging as the de-facto President.

From Members of Parliament pay debacle to now the teacher’s strike, Ruto is turning out to be a Mr. Fix it. However, given the outspokenness by persons who would naturally be his supporters, analysts suspect, am just saying, that Ruto is behind these crises. Ruto’s allied in parliament like Dualle were the most outspoken over the MPs’ salaries debacle.

It does appear that Sossion was getting instructions from Ruto because Uhuru offered the same pay raise to KNUT, but Sossion ostensibly rejected it, actually it was Sh17b, yet Ruto offered Sh16, Sh1b less.

Now ladies and gentlemen if you divide this billions amount by the number of teachers it comes down to Sh800 bob per teacher per month. $ 10 a month by whichever currency for those in the diaspora. Cant fuel my fuel guzzler for my one way trip to work, pole walimu.

Sossion sacrificed the suffering, hopes, pains Â and aspirations of an entire teaching force,at the alter of raising the political profile of his Kalenjin tribal leader.

That a Teacher’s Union Leader can only listen to his tribesman delivering the same offer, that the President himself had personally offered him, Â speaks volumes about Kenya’s tribal politics, even when a very important cause like Teacher’s salary and a question like whether teachers should be trained to use tablets etc is on the table.
If this is true, then it does appear as though Ruto’s new found strategy is to keep the government in perpetual crises, of which he is the epicenter but which are being executed by his sidekicks and tribesmen like Dualle and Sossion, and then staging stuff so it appears as though he resolved the crises.

That’s smart politics because it keeps Ruto relevant, but dumb because it runs the danger of breaking power rules like ‘never outshine your master”, which Ruto has become fond of breaking with impunity. He has to be ‘Vice Presidential” if he is to survive inside the Uhuru circles.

“Many of you have clearly not seen what has happened in the Jubilee Coalition…Let me open your eyes, RUTO is clearly out to undermine the President, the cracks are clearly starting to show…Watch this, first the President bluntantly refuses to add MPs salaries, then Ruto sneaks behind his back and adds MPS salaries, Then KNUT goes on strike for 3 weeks -note that KNUT chairperson is from my tribe and by extension Ruto’s..The PRESIDENT and HIS SIDE of the Government Plead even on national TV while RUTO is so quite at the back, the cunning RUTO times when the President is gone mark you the PRESIDENT through his Cabinet Secretary of Education decided to close all the schools indefinitely as no solution to end the strike is seen insight just after the President does this, RUTO calls his home boy Sossion and a ‘deal’ is sealed REALLY………Then what government are these guys belonging to HOW IS IT POSSIBLE THAT UHURU and his clown close the school cause no deal is seen in sight then Ruto all over sudden closes a deal….My advise to RUTO be careful, be very careful MT.Kenya Maffia hapana mchezo”

Unlike the Raila- Kibaki Grand Coalition government, which was guaranteed by UN’s Ban Ki Moon himself, UhuRuto’s is just guaranteed by handpicked council of elders.

Other than the Kalenjin suppport, Ruto has very limited political support, and given that numerous other political bigwigs are baying for his blood, his political obituary can be written so fast.