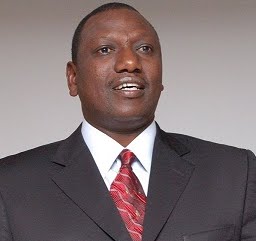 Standard Newspaper, which I disdainfully refer to as a kalenjin newsletter, on Sunday had four of its first pages talking about another high-ranking kalenjin called William Ruto who is Jubilee government’s deputy president.

Standard Newspaper is allowed to talk about Ruto. In fact, the paper is allowed to market his politics of restlessness and chicanery. What the paper should not do is to hoodwink the same kalenjins that Ruto is causing ‘global panic’. We, the people who voted Raila Amolo Odinga and Stephen Kalonzo Musyoka, are not that gullible. We do not buy political claptrap that easily.

Look at the appointments. When cabinet secretaries names were first announced, the jubilation among his kalenjin weaklings was at its peak; in social media and in smses, those of us who have friends in the Rift endured it all. “Know people”, “who is laughing now”, “Mau forest results”, “Real Principal”, “full mkate, si nusu”, and all other blah blah blah of a victorious opponent.

We took it in our stride, have lived past it and still strong. No, we have not lamented of being ‘shortchanged’; we knew which government we voted and yes, we understand which government in power. We are where we inevitably would be when lost.

However, for the Standard Newspaper to talk about ‘CORD strongholds’, when marketing Ruto, and how the newspaper thinks other leaders in these regions, especially Raila Odinga, as being out of ‘the way’ is ludicrous!

Ruto should concentrate on building his name in Central Kenya first. If two communities could deliver the presidency, then they only need to agree on some sort of a ‘political merry-go-round’. To look Western is to add to what many of us know that the March 4 elections was a fraud.

The Standard Newspaper should tell Ruto the odds in very clear terms. He was part of a political fraud. He has no following outside the Kalenjin Rift-Valley. He is neither causing anyone sleepless nights or panic.

You see, the ICC issue will come to an end. When the ‘witnesses’ have been bribed, maimed, or disappeared, the court cases which propelled them to power will finally end. What will never end is the memory of the whole ordeal.

There are Kenyans who still live with these wounds. They are not in any organization. They did not take their cases to The Hague. They will not be withdrawing any case. They do not even have lawyers.

These are the Kenyans Ruto and this Jubilee government are causing panic in their midst. They are the true victims. The true post-election violence victims. Kenyans like Muteshi, the eldoret IDP whose land Ruto allegedly grabbed through one Yator. Kenyans in Borabu border. Kenyans who came to Migori carrying body parts of their loved ones.

In Nyanza, Western, Coast, Eastern, Northern Kenya and Nairobi, Ruto is politically ‘nothing’. Beyond the Standard Newspaper, beyond the Kalenjin Rift Valley, Ruto is NOTHING! If not for you, let it be known that as far as I am concerned, using my constitutionally protected freedom of dissent, William Samoei Ruto, Deputy President of the Republic of Kenya, is POLITICALLY NOTHING!

But, as I said earlier, there is nothing wrong with the Standard Newspaper selling Ruto. He is one of their own. However, just as they want us to buy their political rubbish, they should also be ready to get our feedback. Point blank!

We have not moved on. We are still very much around March 4. We may stick around this date until the next election, until the votes are finally counted again! We only hope around then that Isaack Hassan and James Oswago will be MILES away from the tallying centre and that no server will again be shared!

One other thing we know for sure: we are through with the Supreme Court!

-The writer is a disappointed CORD voter in March 4 elections who is trying to ‘move on’.