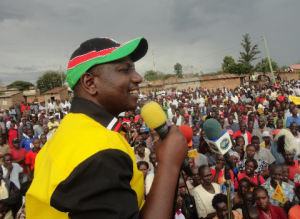 The Jubilee campaigns are crumbling. Rift Valley has now gone from a locked in for Jubilee to a Tossup province. The Tyranny of numbers is now just a myth that has been demystified.

My prediction is that going by the Raila frenzy in Kapenguria, and Pokot which is apparently Poghishioâ€™s backyard, is testament to a crumbling campaign that is fast losing support in the Bread basket province.

For Ruto, the honeymoon appeared to be over as he was booed when he tried to campaign for the URP candidate Bishop Jackson Kosgey. The public shouted pro-Gideon Moi slogans, and cut him off.

He was only allowed to continue speaking when he declared that Gideon is his brother. Rutoâ€™s attempts to say he will give Gideon a State job, were met with resistance, because letâ€™s face it, that was disrespectful to Gideon Moi.

As Ruto was being booed in Baringo, Raila was being celebrated in Pokot for his unmatched development record. He also didnâ€™t go empty handed as he also launched a ground breaking ceremony for a cement plant and a power-plant which is expected to produce 65 MW.

The crowds were enthusiastic and ecstatic about their leader who has been walking with them in their journey to this point. Not some last minute person who is only calling them when he needs something from them in 2013.

Rift Valley has 3,373,853. Cord Zones are like the Non-Kalenjin Trans Nzoia, Maasai Narok, Kajiado, Â Pokot, Turkana which gives you 1,084,392. 40% at minimum of URP zones can be said to be Corded due to Historical Land grabbing related injustices. Again donâ€™t be surprised if it jumps to 55%. (follow this link for an in depth analysis https://www.kenya-today.com/opinion/the-tyranny-of-numbers-2-0-mutahi-ngunyis-analysis-refined)

Remember Trans Nzoia is Bukusu heavy, who are CORDED. Uasin Gishu is cosmopolitan with Luhyas, Luos, Kisiis who are Corded while Jubilee might take the Nandis in Uashin Gishu. So Uasin Gishu is a divided Cosmopolitan county that, though leaning URP, will be divided.

Even though people associate Ruto as the Kingpin in Rift Valley, his support is mostly in Elgeyo Marakwet, Nandi, Baringo, Kericho and Bomet, whose registered voters total 1,104,598.

With the influence of Moi family remove Baringoâ€™s 171,013 which by the booing show Ruto doesnâ€™t fully control it. That leaves jubilee with about 900, 000 Kalenjin votes. And thatâ€™s something that the Tyranny of numbers failed to take into consideration.

So all Raila needs is 30% of the URP controlled zones namely Elgeyo Marakwet, Nandi, Baringo, Kericho and Bomet to get enough votes to give him victory, which is the least he can perform due to historical injustices related to land grabbed from the people in these areas. Cord will also harvest heavily from Nakuru town which is cosmopolitan.

Rift Valley is now at play. Itâ€™s a swing province which from this analysis can go either way or at worst 50:50.

All this mix puts 1.2 million votes in Cordâ€™s pocket guaranteed. So Raila starts from 1.2million while Jubilee starts from 900,000. Laikipia and Nakuru TNA votes wonâ€™t matter because Raila would have milked all he needs to win from the non-Kikuyu Rift Valley. Letâ€™s watch as this fight for Rift Valley unfolds.

What that means is that Raila has broken through Uhuruâ€™s firewall- The Rift Valley, on whose premise his campaign heavily banked on. That leaves the Jubilee flag bearer very exposed, only 12 days to the election.

Sad thing is that as Raila grows in R.Valley, Uhuruâ€™s house of cards thatâ€™s glued with money is collapsing.

His will only be remembered as the Jimnah Mbaru style elitist campaign to a council of elders based population where digital vs analog narrative wonâ€™t hold.

Books, pens, shoes, school uniform is what they care about, and is what Raila is promising. A simple basic agenda. Itâ€™s the difference in campaign message between an elitist St. Maryâ€™s educated man out of touch vs a humble leader who went to school with regular folks at Maranda.

Common sense vs. fantasy is what Kenyaâ€™s 2013 election is about. Its a competition between a man who understands the challenges faced by citizens at the bottom of the pyramid- Maslow Hierarchy of needs versus one who doesnâ€™t.

A hungry kid who has no pen and a book to write on doesnâ€™t need a laptop; he needs food, book and a pen. That is why Railaâ€™s message will continue to resonate with the Rift Valley voters. So that as Raila support goes North, Uhuruâ€™s continues to tank.

Thanks for your CORD Support.