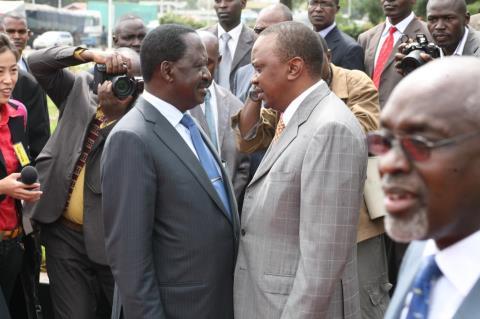 By William Makora
The son of the late Mzee Jaramogi Oginga Odinga and doyen of opposition politics in Kenya, Raila Amolo Odinga is the man in charge of political rivalry against the son of the founding father of the Republic of Kenya, Mzee Jomo Kenyatta and President Uhuru Muigai Kenyatta. While a number of opposing Kenyans believed that Railaâ€™s father was more popular than Uhuruâ€™s father, the latter effectively remained in charge of affairs of the nation. Jaramogi aspired for Kenyattaâ€™s throne in vain. Today Raila is plucking strings of the harp. Will he ever see the dawn of his dreams?

In trying to answer the question, I would like to retrospect words of my grandfather. That old man (may God rest his soul in peace) would gather us by a granary on his backyard and begin admonishing us: â€œMy grandsons; life is a short period of suffering punctuated with irregular happiness. Consider to do what you desire when you are younger and stronger. There is no hope in old age. There is no strength in a man like me. My life is stooping before my age like a stalk of wheat drying in the field; you can look at it and say everything about it; if the yield is a pity you can tell it from a look. I cannot say what yield the land will get in you.â€ With those words and more, I learn that old is not mould but gold.

In bold calmness, the old man let us understand that, while experience belongs to the aged, discovery belongs to young. That is what I see in case of Raila and Uhuru. Raila is experienced in politics. Uhuru is skilled in politics. When experience maxes out and begins to plummet, skill keeps its stable shoot. Uhuru has simply exhibited this fact by bundling Raila to political wilderness after defeat in last yearâ€™s elections. He studied the former Premierâ€™s game and unleashed a fatal onslaught that left the old man awed to date. The defeat has not only left Raila with lose of his face and history; he is losing his name as well.

Since he entered active politics in 1997, the Amherst College, (USA) Political Science graduate, President Uhuru has exploited variety of advantages in politics to arise to the throne. This is unlike Raila, the Magdeburg College, (Germany) Mechanical Engineering graduate who has spent over three decades in active politics. While Uhuru keeps his dice close to his heart, Raila has always laid it open for all and sundry to know. His edginess always dearly pays him back with his coins. Is Raila not always sure of his ability?!

In 2005, Raila opted to testing the waters by standing against former President and Uhuruâ€™s predecessor, Emilio Mwai Kibaki, in a referendum on constitutional review. Uhuru joined him and â€˜theyâ€™ won with a landslide. Sooner or later Uhuru decamped and joined sacred Kibaki who promptly began a retain-the-power scheme. It paid off in 2007 elections before Railaâ€™s associates trooped to help Uhuru clinch victory in last yearâ€™s presidential elections.

Currently, Raila is uncertainly engaged in seeking to test waters with a referendum. His pool of advisors and henchmen think that is what it takes for a politicianâ€™s popularity. In the undercurrents, they are merely creating shows without serious resolves really. If the referendum finally comes to pass it will leave Raila with a desolate pair of hands to show for politics. He will be a history; lost in the pond of painful admirers with nothing, really, to show.

It is clear to all Kenyans that Uhuru is brilliant tactician capable of assembling associates from all corners of Kenya. Raila easily carelessly loses his admirers. He does not seem concerned about grievances of dissents. He seems to believe more in his old ring of henchmen, who are decked in robes of big man mindset, than fresh ideologists. That dumps him to the miry pool of weary history.

Uhuru may not be more concerned with what Raila is doing in politics today; that would be the business of idlers. With the mandate he enjoys he knows he has a lot to do. He has the opportunity. He has the goodwill. He has the resources. He has the challenge. Raila only counts for opposition, especially if he is not ready to serve his admirers in capacities provided before him. He does not need to be flexible; he only need to reason up. Otherwise, he may squander space for leadership and drawn in the drain

With Railaâ€™s clout of advisors, there is more hope in a child than an adult. And because he seems to enjoy the ride, the nation may be engaged in a separate ground. Then someone will tell me that Raila is the answer for opposition leadership and I will say it is politics is in a deep sea; more hope in a blowing wind than a dark cloud about to fall on the land!

There is no need of chasing shadows; Raila has and will never defeat Uhuru in any election.