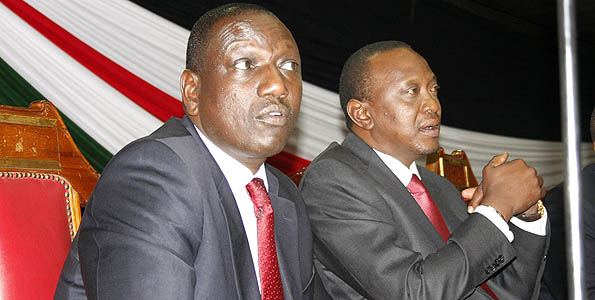 I donâ€™t think I would be wrong to say that Uhuru Kenyatta miscalculated in his choice of the members of the executive. While many pundits raised this alarm immediately their qualifications were laid bare, no one was taken seriously. Itâ€™s even astonishing that parliament allowed some of the half baked professionals a green flag to go ahead and occupy helm at the ministers. One questions if the parliamentâ€˜s role has to become a loyal dog to the executive or an actual full powered branch of the government. If there will be a reason for failure of Jubilee, it would be because of the cabinet secretaries and the sycophancy of its elected officials.

Today, many will call me a hater while stating this fact, but letâ€™s just say it: A lot of Jubilee’s Cabinet Secretaries â€œDigital” are actually incompetent and cannot do anything for the country. They are more backward than analog; probably steam engine rail is their match. Letâ€™s list some of the worst performing secretaries against their qualifications.

1. Joseph Ole Senku only got a degree of Bachelor of Commerce from Nairobi University in 2009. Probably one of those infield programs made famous by teachers from up country during holidays. Worked his entire life (with a diploma) at Utali and Serena Hotels. Has very limited knowledge of the complex world of intelligence, security, and information dispensation which are key to the running of the interior of a state. For those who donâ€™t know, Interior Minister is the equivalent of Internal Security which was duties of George Saitoti and John Michuki in the previous regime. Is ole Senku a joke or what? I mean how is hotel connecting to military intelligence at all?

2. Rachel Omamo: I have no doubt at the qualification of Rachel Omamo as a lawyer. I have serious doubt on her qualification as the secretary of defense. Being a secretary of Defense means that Omamo. The secretary of defense qualification includes planning of policy for development of defense mechanism for Kenya, planning attacks, resource management and fiscal and program evaluation. She is also the presidentâ€™s top commander. The question is, where was she during the Westgate Scandal? Why was she absent? Why doesnâ€™t she give statement when our cops are killed? Final word, she doesnâ€™t know her job, or her Law degree from the University of Kent in the United Kingdom is irrelevant to the task at hand.

3. Anne Waiguru: Our Secretary of Devolution of Planning is one with impeccable educational experience matched with work experience. Still, she has failed to deliver. The Devolution process in Kenya is a shamble. The National Assembly has taken devolution hostage rendering the Senate jobless. The Governors are forced to answer to PCs, and chiefs. They canâ€™t hire and fire. Waiguru has not said anything. I forgot, she is waiting for a presidential directive.