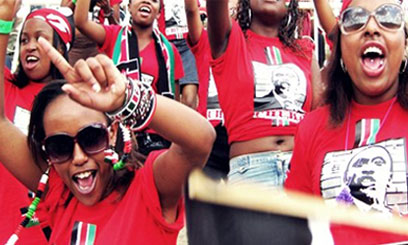 When we lobbied to have the Ministry of Youth Affairs in 2006, President Kibaki heeded to our calls based on the fact that the “Mainstreaming of Youth” agenda had failed. Many gains have been felt since then. The Youth Enterprise Development Fund has realized somewhat results in supporting the enterprise agenda. More youth have their own businesses now due to the ease of accessing credit albeit the high interest rates. More and more youth can now carry out business with Government using the 10% procurement rule. There more other private youthful ventures going on and this gains need be replicated.

The environment for youth empowerment has been improving amid the structural and systemic challenges that youth still face today.

As a result of the last elections, young people constituted 61% of the 85% voter turn out. There are over 35 youth as Senators and in the National Assembly and over 300 youth elected as County Representatives. This shows the brilliant performance of youth in the just concluded epic elective contest.

A friend said that the youth made their money during their campaigns and those that were clever bought fuel guzzlers. This statement isn’t far from the truth.

In redefining the structure of the new Government, the president and deputy president lumped up the Youth to be an insignificant department in Government. The president is on record as saying the youth will be mainstreamed within all functions and decision mKing of the Government.

It has always been my position that the creation of a Ministry of Youth in Kenya contributed immensely in the sidelining and marginalizing of youth in matters governance as well as decision making at policy level. All other ministries shunned the youth while the Ministry of Youth equally turned a blind eye to the same youth that created it. The officer who were redeployed to the ministry had no clue what youth development is. This is a sad state of affairs.

My belief was and continues to be that matters youth should be put on the forefront of every ministries core functions. This is beyond a youth desk at the ministries. It is about making sure that in each step of every policy development, the emergent challenges that the country’s youthful population must be entrained in order to address those issues with an open minded strategy.

At this juncture I would like to congratulate the president and deputy president for nominating the cabinet secretaries. Many of them have very superb CVs and I have no doubt that given a positive political goodwill, they will perform their duties to Kenya with diligence. However in the same vein, I would like to protest the nomination of Charity Ngilu as well as Najib Balala. The deputy President categorically pointed out that there shall be no politicians in cabinet. This seemed to have been a public relations lie.

It is now the time for the youth to come out and protest the reluctance of the President and Deputy President despite their promise of ensuring the youth are included in their Government, they have gone contrary to that assertion by cutting of the Ministry of Youth and at the same time not nominating even one Youth in Cabinet. We now need to see as many youth organizations and individuals writing the Parliamentary Committee to state this fact in ensuring adequate youth representation at Cabinet level.

We should remain vigilant but at the same time constructively contribute positive agenda in support of the Government to deliver it’s promise to the youth of Kenya.