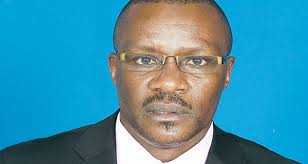 Former Prime Minister Raila campaign manager Eliud Owalo is the list of the CID’s most wanted, reason? he is alleged to have engaged in subversive activities! Owalo was summoned by the CID last week and is required to report back the CID Headquaters on Monday 22 August for further interrogation.
Owalo has termed the move by the CID as intimidation, here below is his detailed account of why the police and by extension the Uhuru government is after him.
Last Sunday, July 14, 2013, I penned an opinion article on the need to disband the Independent Electoral and Boundaries Commission.

On arrival at the Jomo Kenyatta International Airport, Raila spoke strongly on, among other things, the urgent need to disband the IEBC, terming it the most disgraceful, corrupt and inefficient in multi-party Kenya. Mr Odinga repeated these sentiments in Laikipia the next day.

Later that day, a posting appeared in Jackal News, an online propaganda publication ran by a TNA operative, under a heading, â€œRaila Odingaâ€™s Aide named in Plot to Destablize Governmentâ€. The story was complete with my photo.

I posted on my Facebook and Twitter a response to the Jackal posting. In my postings, I stated that the reports doing rounds in the blogs emanating from the so called “Jackal News” linking me to “plots to destabilise the Jubilee Government” was utter nonsense.
I said: â€œThis is cheap propaganda being peddled by the Jubilee Government through the security and intelligence apparatus and their agents to divert the attention of Kenyans from the myriad challenges it is facing, including but not limited to the on-going teachers’ strike and complicity of Jubilee and the IEBC in the Makueni by-election nomination fiasco.â€
I appealed to all Kenyans of goodwill to treat â€œthese mischievous allegations with the contempt they deserve.
â€œThe Jubilee Government must be alive to the fact that it will be evaluated on the basis of its scorecard against its campaign manifesto; and should therefore desist from diversionary tactics aimed at apportioning blame for its non-performance. Nobody of sound mind will labour to sabotage a Government that is not only dysfunctional but also has its priorities upside down,â€ I said.
I thought this matter would end there. To my surprise, on Tuesday morning, I got a call from a Mr Cheruiyot from CID headquarters who told me I was needed at the station to clarify some issues.

I informed Mr Cheruiyot that it would require that I reorganize my diary to be able to accommodate the summons. I further suggested that my lawyer Senator James James Orengo would get in touch with him to arrange an appropriate time for the clarification that CID needed.

About 15 minutes later, I received another call, this time from a Mr Kariuki who said he was Mr Cheruiyotâ€™s senior and that I needed to go to CID headquarters immediately and clarify the issues which were urgent and could not wait. I thought I needed to be a law abiding citizen, so I told Mr Kariuki that I would go to his offices at 4 PM despite the fact that I had not received an official, written summon, contrary to Section 52(10 of the National Police Service Act.

I appeared before Mr Cheruiyot and five senior CID officers at the Serious Crimes Office at the institutionâ€™s headquarters in the company of my lawyer Mr Anthony Oluoch where the allegations below were read to me:

1. That Eliud Owalo and un-named other persons have an intention to recruit youths to cause chaos.

2. That Mr. Eliud Owalo has been holding secret meetings with youth as part of the orchestrated plans to cause chaos.

3. That Mr. Eliud Owalo together with other un-named persons have the intention to provoke the police by deliberately engaging them in constant running battles.

4. That the youths being targeted are those in major towns and slum areas.

5. That Mr. Eliud Owalo plans to incorporate the civil society and the clergy or churches in these scheme to scheme to cause chaos.

6. That Mr. Eliud Owalo intends or is in the process of trying to cause of initiate a popular revolution similar to those in the uprising in the Middle East and in particular the Egyptian style revolution or uprising.

7. That Mr. Eliud Owalo intends to re-grant a popular movement or uprising similar to that prior to 1992 clamour for multipartism.

8. That Mr. Eliud Owalo intends to use or is working with Foreign Embassies and Diplomats to use the ICC matter to cause disaffection between the President and his Deputy on the one hand and the international Community.

9. That Mr. Eliud Owalo has received or is about to receive monies from foreign sources for purposes of furthering the above objectives and a law firm has been identified in Nairobi to be used as a conduit to receive these monies in the pretext of monies for legal transactions.

10. That the CID already have a confirmation that some of that money is already on the way and will reach Mr. Owalo or the intended accounts by next week.

I thought I was going through a bad dream, or that I was reading a novel written about the events of Kenya of the 1980s. But this was happening last week, in 2013. It was real. But it was a scripture deep from the past.-the theatre of the absurd.

And it is not over yet. On Wednesday, CID wrote an official summons to my lawyers asking that I avail myself on Monday, July 22, 2013 at 11 am â€œwithout failâ€ to O/C Serious Crimes Unit at CID headquarters â€œand to assist in investigations on the allegations communicatedâ€™ earlier. The Summons did not now articulate the allegations on the basis of which I was being summoned, which I suspect; could be a ploy to allow for substitution of the same with graver fictitious allegations.