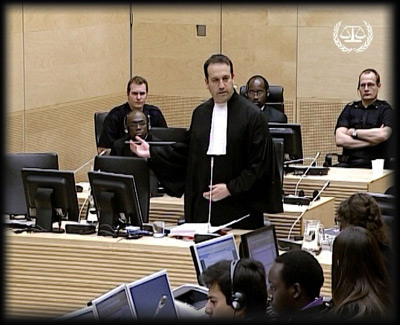 Just for the record, Walter Barasa is one smooth dude.

Suddenly he has some high-flying Israeli lawyer on his side. This lawyer, Nick Kauffman, is the same clown who brought a laughable application to the ICC on behalf of Itumbi, where he sought to be paid huge sums of money by ICC.

Now ladies and gentlemen, calm down!!

There are no prizes for guessing who is paying Kaufman.

The very same Kaufman who represented Itumbi is now representing Barasa a man with no money. A broke man who could not even afford to pay Kshs.30,000 from Eldoret to Nairobi for a taxi is now able to pay Kaufman a high flying lawyer.

Think for yourselves. Question stuff.

Letâ€™s tell you a little bit about Kaufman.

British-born attorney Nick Kaufman worked for years as a prosecutor in Jerusalem, and represented Israel at the International Criminal Court. Now he is defending clients accused of some of the worldâ€™s most heinous crimes. Itâ€™s all in a dayâ€™s work.

Kaufman is an expert on international law. He accepted the urgent request to join attorney Vadim Shub and to defend the Israeli who is being sought for trial in Bosnia for crimes of genocide.

Kaufman, formerly a senior district attorney in the Jerusalem prosecutorâ€™s office, was the first Israeli prosecutor to work in the International Criminal Court in The Hague. His list of clients includes Kaing Guek Eav (better known as â€œComrade Duchâ€ ), head of the Tuol Sleng Prison, in Phnom Penh, one of the symbols of the atrocities of the communist Khmer Rouge that ruled Cambodia in the mid-1970s. In his trial, which took place in Cambodia, Eav, who was called â€œthe hangman of the Khmer Rouge,â€ admitted that he was involved in the torture and murder of about 12,000 people. Last July, he was convicted of crimes against humanity and sentenced to 35 years in prison.

Only recently did Kaufman leave hastily for Paris, in order to meet Callixte Mbarushimana, an activist in the underground movement of Hutu refugees in Congo (the Democratic Forces for the Liberation of Rwanda, FDLR ), in La Sante Prison in Montparnasse.

In 2011 Muammar Gaddafiâ€™s daughter, Aisha, hired an Israeli lawyer to push the International Criminal Court to investigate the killing of her father.

Aisha Gaddafi, the daughter of the late Libyan dictator, is asking the International Criminal Court to investigate the killing of her father and her brother Mutassim by Libyan opposition forces in October, suggesting that the rebels, together with NATO forces, may be guilty of war crimes.

The lawyer hired by Ms. Gaddafi was, wait for it, NICK KAUFMANâ€¦

Now letâ€™s get back to Kenya comedy of movies and drama:

In the case that Itumbi filed, ICC prosecutor Fatou Bensouda denied ordering the arrest of blogger Dennis Itumbi earlier this year. She however endorsed the arrest or detainment of Itumbi saying it â€œappeared that the Kenyan authorities had a legal basis for doing soâ€.

In this case Itumbi hired Nick Kaufman as his lawyer.

Through his lawyer Nick Kaufman, Itumbi wanted ICC to compensate him for illegal arrest and detention over ICC website hacking allegations.

â€œAs the applicant was not arrested or detained at the prosecutionâ€™s request, but rather arrested pursuant to Kenyan domestic law and by Kenyan authorities, he cannot validly make a compensation claim before the court pursuant to Article 85(1),â€ Bensouda says in her filing made on October 26.

A claim for compensation if justifiable, she argued, could only be made to the relevant Kenyan authorities. Bensouda said Itumbi did not clarify if he was arrested, that is taken into custody for suspicion of committing a crime or detained for questioning.

She, however, said a final determination on the matter could only be made by the appropriate Kenyan authorities with complete access to the facts and knowledge of the relevant law.

On September 28, Kaufman acting on behalf of Itumbi wrote to the trial judges asking them to rule that Itumbi was illegally arrested at the behest of the ICC. He said the application was a preliminary step to seeking compensation.

And there you have it gentlemen, your guess is as good as ours. Remember that Walter Barasa cannot even afford a taxi to Nairobi????

This opinion piece was first published at http://whereiskenya.com/