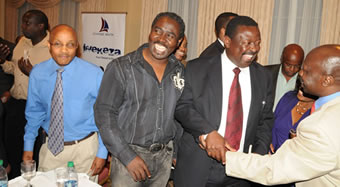 Am so saddened today because I have just received reports from my friends in London that a certain Presidential candidate is dishing out 50 sterling pounds to Kenyans who attend his meetings.

Now that is good money for 2 hrs of sitting down, and having refreshments. Itâ€™s worth calling off from work for a common Londoner.

This money is definitely project money, which could even be Anglo-leasing moneyâ€¦

However, the problem with this is that our corrupt habits, and voter bribery is being exported overseas, our impunity is being taken to places where if itâ€™s found out, Kenya could be an epitome of shame.

I hereby publish a conversation I had with my friend in London. I have with-held photos that appear during facebook chats to protect Identity, otherwise this is raw un-edited conversation, read between the lines:

With permission from the other party, below follows a conversation that my friend in London and I just had in a chat conversation:-

let them bring money nobody will vote for them

What do you think ? is he going to win the president sit ?

Report him to the scotland yard

Just make an anonymous call of a person bribing voters

so well money we canâ€™t say not to it

hOW Much was he dishing

not bad for a night out ha ha

100 pounds is alot for 2 hours of a meeting, sitting in a hotel

Not even what a nurse of pharmacist makes in London right?

someone must have given him a tip off

NB: I urge Patriotic Kenyans in London to come out and corroborate this story: The story of an unpopular leader attempting to endear himself to the diaspora through dishing out cash.

First this is a shame, and it doesnâ€™t bode well with Brand Kenya. I know we stink on matters corruption, but lets keep the stench of our corruption within our borders.

This is so difficult let me get some tissues, am out of here, so sad- if u have this manners then we are staring at a nation that is about to turn back the hand hands of time, a nation about to elect a despot.

Anonymousâ€¦â€¦â€¦ As a responsible citizen, I have with-held the names of the persons involved but if ur name is MaDVD then ur a shame on our country. You are old wine in new wineskins.