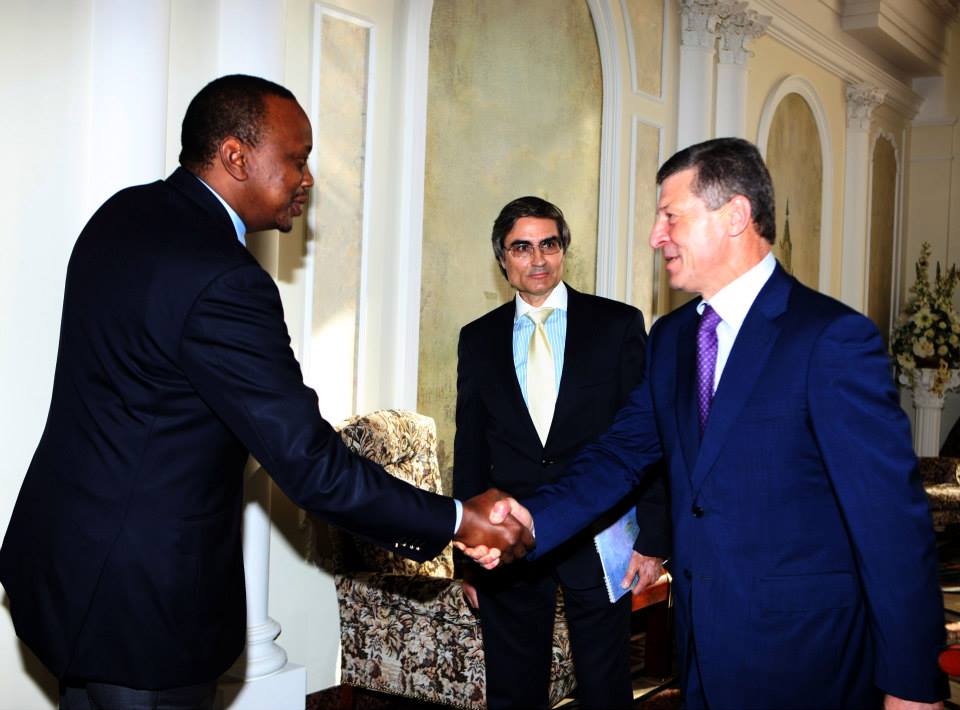 Uhuru only managed to meet the Russian Federation Deputy Prime Minister Mr. Dmitry Kozak (equivalent to our own Kazungu Kambi or Musalia Mudavadi) on the sideline of the 14th IAAF World Championship in Moscow, Russia.

By Jon Stewart – embedded with the Kenyan delegation to the Summer Olympics in Moscow, Russia. For the Daily Show.

No frills President of Russia, Vladimir Putin, who loves Karate and not ICC suspects completely ignored the March 4th elected President of Kenya whose stampede in Moscow only captured the imagination of a few Kalenjin athletes and no other segment of the socialist state!

So dejectedly snubbed was the March 4th elected President of Kenya that sources who boarded the plane with him where almost dropped in the pacific ocean for not warning the president earlier enough. Imagine, as Kenyatta arrived at a small unknown airport, the equivalent of the Miraa-starved Wajir Airstrip, security personnel, some very junior by our own standards, ransacked every luggage of the President for any weapon of ethnic cleansing which sources had earlier told Kremlin the ICC accused the March 4th elected President of Kenya was allegedly smuggling in an attempt to hide evidence from the feared mother of justice, Fatou Bensouda (LOL).

As usual, a host of local reporters, many from k24 and Kameme FM, had been airlifted to Moscow to broadcast live the meeting between Karate loving Putin and our duly elected March 4th President of Kenya. This meeting did not take place because it was not suppose to take place. It was not supposed to take place because Kenyatta, with the ICC cases hanging on his neck, lacks legitimacy in the international community. Putin, like Obama, also takes seriously the murder charges against the March 4th duly elected President of Kenya. Indeed, choices have consequences.

While in Russia, the president was handed back the book-long vest of policeman and runner Ezekiel Kemboi which had some bad writings. A source close to no frills Putin now claims when the Russian leader inquired to know what the Mohawk wearing Kenyan athlete had written on his vest; he was so appalled that he ordered the organizers of the Olympics to burn that vest. For now, we do not know what to believe because we all along thought Kemboi handed over the bad omen vest to Kenyatta. This new information has baffled us too; but we will follow it for you. Keep peace!

But we will be lying if we do not mention that Kenyatta in deed met some Russians. Except for the security policemen at the airport, Kenyatta met a section of inner city (equivalent to Embakasi chapter of Kenya Chamber of Commerce) Russian Chamber of Commerce officials whose lectures bordered on the fundamentals of commerce. It should be noted that these were neither investors nor officials of the Russian government. Which brings us to the million shilling question: Why did the presidential press service lie in their press release that Kenyatta’s visit to Moscow was a STATE visit, or to make it more succinct; a bilateral trade tour?

While we do not yet know how the Beijing tour will go; Kenyans should begin living with the sad truth that ours is the most discredited leader of an emerging African nation in the 21st Century, except, fortunately, that we have Zimbabwe and Somalia in the continent. After Hu Jintao and Xi Jinping handing over political power, the current leaders of China may very well snub Jomo II.

Kenya under Jubilee Alliance, whose chief pet campaign issue was excessive bashing of the West and dealing with the East, is fast realizing that the international community is not composed by only two tribes. Already, after the Moscow-Beijing visit, we can comfortably say that the Uhuru-Ruto government has knocked all the doors which the were to replace the Western world. Just the other day, Ruto came back from Japan empty-handed and headed straight some hurriedly arranged “home-coming” ceremony of some URP politician in the arid north. Empty-handed is the word.

While it was widely reported that Nairobi Governor Evans Kidero was to accompany Uhuru to China, this too remains to be seen as the economic relevance of the trip is not currently guaranteed. Kidero, elected by ODM under CORD, is now being said to have developed an ice-cold feet and a melting scrotum; considering the shame that the much hyped Russia tour has brought to the March 4th President of Kenya.