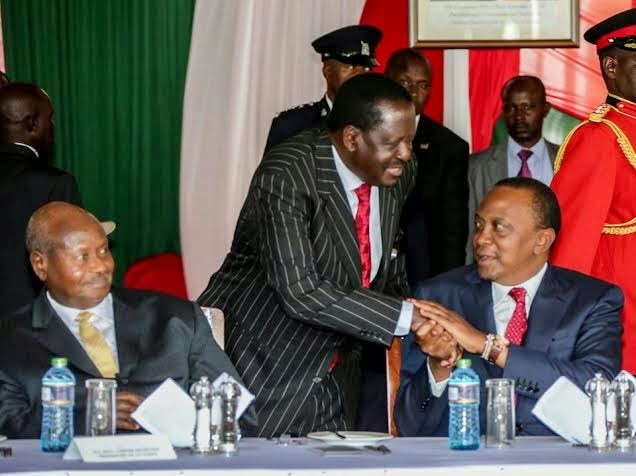 By Samson Ogola
There is just too much duplicity, hypocrisy, pretence, two-facedness and insincerity in Kenyaâ€™s political arena. I want to dwell on ODMâ€™s double standards. Before you pick issues with my supposed bias against ODM let me help you. There are four coalitions in this country; one is in power, the other is noisy and the rest are quiet.

I criticize ODM because they always bite more than they can chew. While they are as corrupt and devoid of leadership traits as their compatriots in the Jubilee, they choose to paint a holier than thou picture. ODM claims, among other things, to be the most democratic entity in the country. However, there is nothing in their DNA that is democratic; they are undemocratic to the last man.

Jubilee is bad and clueless, but they are quiet. ODM, on the other hand, is equally corrupt and insincere but moves from city to city claiming monopoly on good governance. Should I assume that? No, such duplicity MUST be addressed.

ODM, under the leadership of Rt. Hon. Raila Odinga seem to operate on zero contact with the government. They have succeeded in painting Jubilee, not as a political opponent, but as an enemy. That is why most supporters will find you uncouth, bitter, and lazy, traitor and a mole if you appear to even remotely support Jubilee.

To them, there is nothing good that can come for Jubilee unless that thing benefits the leader of ODM. Now, that is where the double standards in ODM starts and ends, with Raila.

ODM supporters are as forgiving or unforgiving as their leader. They readily excuse Railaâ€™s dealings with the enemy (Jubilee) but cannot stand another person, more a Luo, doing the same.
Examples of double-standards in ODM/CORD

Dr. Evans Kidero was the first to be branded a mole, a traitor and an enemy. His crime; he accompanied the president to China and UAE instead of travelling with the former Prime Minister to Texas. The fact that he is the governor of Kenyaâ€™s capital was ignored and all that remained in the lips of many was how bad he had bitten the fingers that fed him.

Kideroâ€™s woes were not to end there. The man started conducting fundraisers in Migori and Homabay, a program that didnâ€™t go well with the powers that be at Orange House. An impromptu meeting was convened at Bondo and Kideroâ€™s fundraisers were labelled jubilee frolics meant to undermine ODM leader in Nyanza. The people were incited against him and fundraisers were classified as archaic and incapable of developing an area.

If you thought ODM leaders were sincerely opposed to fundraisers then think again. During the funeral of the late Sen. Gerald Otieno Kajwangâ€™ (Homabay), the man was celebrated as one who, with the support of Raila, started and completed many projects through Harambees. The crowd went into a frenzy instead of booing the speakers.

Fundraisers are really good if Raila, his family or cronies are in charge. Otherwise, harambees remain out-dated and must be rejected by all to save the Luo Unity.

The late Fidel was honoured as a very welcoming person. He knew no political boundaries nor entertained ethnicity. Uhuru and Ruto were his friends. Yes, friends and people were so proud of him for that.

Ken Obura, George Oner and Dalmas Otieno were removed from committees because just for saying that we must work with the current government. Fidel (the late) is a hero and streets will be named after him not to mention that a trust fund was started for his family yet he was friends with the enemies.

Alfred Mutua is one Governor CORD doesnâ€™t love. Like others, he has no problem working with the government to develop Machakos. All over sudden he is a thief, the roads donâ€™t last a day and he is the most corrupt of all governors.

On the other hand, CORD insists that it is Isaac Rutoâ€™s right to work with the opposition. Jubilee are yet to designate Isaac Ruto an enemy combatant, something CORD would have done by now.

ODM Governor must not at any time have dealings with Uhuru or Ruto. If they do, then the supporters count them as traitors. Interestingly, ODM finds working with Jubilee governors and MPs whenever they have a common goal. To them, the Jubilee Governors and MPs are within their constitutional right to associate with like-minded. The question is who took away that right from CORD legislators and Governors?

Ababu Namwamba was a mole because he said there must be democracy in ODM. He has since regained his tag â€˜Generaliâ€™ after he agreed to be an appointed Sec. Gen of ODM as opposed to an elected one. Milly Mabona and Gladys Wanga had to do unimaginable things in parliament to be accepted back into the fold. They had been branded moles for their sentiments and readiness to work with the government

When the president condoled with Dalmas Otieno, he was seen as a mole and traitor but when the same president gave the â€˜Buffalloâ€™ and â€˜Air Force One â€˜to ferry the body of Fidel and Railaâ€™s family respectively, all you could hear was â€˜Ahsante Raisâ€™.

The ODM high priest condoles with known thugs and members of outlawed sects like Mungiki, attends the burial of radical muslim preachers yet no one finds these strange. Like I said, his ills are readily excused. I donâ€™t even want to imagine what CORD would say or do if Uhuru was in bed with the same people.

Kalonzo Musyoka was a wishy-washy watermelon traitor until he joined Raila. Today, he is a reformer and champion of democracy. Khalwale used to sing sarcastic songs against Raila and was designated a â€˜burukengeâ€™. Today, he is the darling of ODM. All it takes to gain the reformer title is to support Raila.

Okundi is old and should retire from politics while Raila (who is currently 70) believes he has every right to vie come 2018. He insists that age has nothing to do with leadership when asked to retire. Some people have worked with KANU and are not fit to lead while Raila was once the KANU Sec. General and worked as a minister under Moi yet is deemed fit to be Kenyaâ€™s president.

“When a man is denied the right to live the life he believes in, he has no choice but to become an outlaw.” – Nelson Mandela

Unless ODM and its leadership stop these double standards they will lose staunch supporters to more tolerant coalitions or parties. You can take that to the bank.

Samson Ogola is a Freelance Writer, Graphic Designer and Medical Lab Tech. He is the founder of POLITICALKENYA.COM blog.