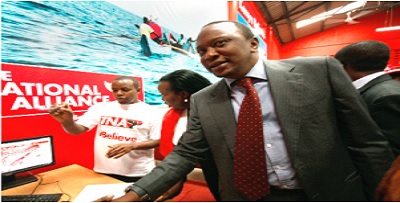 President Kenyatta at his TNA offices, his party mounted a grand PR machine that raised the Jubilee coalition profile during the campaigns

Lauded As Exemplary Kenyan Journalism, Will It Ever Rise After Western PR Assault?

I went to Moi University to grow, learn and marvel. While at it, I detoured to the students press, rising through the ranks as writer, reporter, chief reporter, editor and assistant chief editor. Before I could reach the peak as Chief Editor, I crossed over to studentsâ€™ politics.

At the end of my second undergraduate year, I was sitting pretty at the peak of studentsâ€™ government. Within two years, I had achieved quite a feat. Reflexively, I had begun to appreciate how Media; or Journalism, can be manipulated by Public Relations.

As a student of PR, the national political script today spring directly from our page book! Unfortunately, most of it has been dark PR-or negative Public Relations. Looking at the Presidentâ€™s script, since The Hague reared its ugly head here at home, and Ocampo, Ekaterina, and now Bensouda became catch phrases, each day has been a page in Arthur R. Roalmanâ€™s Profitable Public Relations.

Back in the University, in my circle of friends; mostly literature, linguistics, journalism, public relations, media science, political science and information science students, we mused a lot at how so much was being cobbled up to appear real. Apparently, everything used to proceed from pure propaganda, then publicity stunts, then the 7 oâ€™clock bulletin was just â€˜official newsâ€™.
If political scientists safely argue that despite the perceived institutional failures of the IEBC and the Supreme Court, CORD Coalition lost to the Jubilee Alliance, or Raila Odinga lost to Uhuru Kenyatta, academicians, especially those in the field of media practice, can too demonstrate that Journalism lost to Public Relations.
Yes, when British PR firm, BTP came to spin for Hon Kenyatta, and Mark Pursey with compatriot Charles Anglin were joined by Ed Staite, Simon Waddington, Charlie Tarr among others, our equals in newsrooms-the editorial teams, got the goalpost shifted. They were dealing with political communicators schooled in â€˜how a journalist thinksâ€™, and trained to manipulate journalism to media relations-a sobriquet of political propaganda. I marveled.
The Mutuma Mathius, John Mbuguas,Oketch Kwendos , John Bundotichs and Denis Galavas of this country became spectators.

Even more pitiable were the CORD spin-masters. With no media strategy, information flew everywhere. â€˜Small fishesâ€™ took on â€˜big fishesâ€™. People like Eliud Owalo became loose cannons, fighting unnecessary wars with everyone-the IEBC, the police, the intelligence service, even the defence forces. It was a ploy, and looking at it; it worked for the Jubilee Alliance. This is verifiable!

No campaign in the history of this country had been waged for so long, by so young a team, using new media tools and professionals, than President Kenyattaâ€™s. Again, no campaign had been fought by just one man, surrounded by quacks of all shades, than Odingaâ€™s.

While the practice of Journalism is understood as giving the people the information they need in order to understand the world around them and make decisions about their lives, from setting the agenda to correlation of news events and edutainment, much of what went to the people through the newspapers and news broadcasts had been nothing short of mass media duplicity.

It is difficult to tell today whether Kenyans really understand the interplay of global politics. From the media, Uganda seems to be an important Kenyan bilateral partner than Great Britain and the USA combined. The African Union, or IGAD, or the EAC seems bigger than the United Nations, and neocolonialism is worse than tribalism, corruption and nepotism. Equity Bank appears to be the biggest government lender and the World Bank and IMF can go to hell!

In body politic, Dark PR is key. Mugabe is more welcome than Kofi Annan and Al Bashir is a symbol of African statesmanship. The alleged genocide in Darfur is a western creation and post-election violence in Kenya was a blockbuster movie. Reconciliation comes from political unity and tyranny of numbers sends stronger message to the world that impunity in Kenya and Africa needs â€˜ideologicalâ€™ solutions rather than the courts of law.

All over sudden, there is a new siege Africanisation mentality. Kenya is an independent African country, with African leaders, enjoying emergent African democracy. One wonders if the West is in another attempt to scramble and partition Kenya. The CNN is worse than K24 and BBC only want to report bloodshed and violence. They should take cue from our journalists! Politicians are more trustworthy than civil society activists and Francis Atwoli makes more sense than Maina Kiai.

What is happening in Kenyan press today can be equated to what mainstream conservative American channels used to report about the African-Americans not so long ago: That there were more African Americans in Jails than in Schools.

The danger with this extended political PR, as has been aptly observed by my friend Obilo Kobilo elsewhere on this blog, is that it has the potential of humiliating the â€˜journalistic truthâ€™-the very ingredient for the existence of journalism in societies.

As the new president has shown even after bagging the presidency, he is still not ready to let the journalists go.

I admire Hon Kenyatta because he understands what he needs to do: Give journalists more tea and no information; know them in person and by names, invite them early but seal all information sources. Finally, have Bill around, not crying but smiling, give the information you want the country to know. Get back to your house and turn on the TV . . . Mr President enjoys watching pure PR!
How long will this circus go?https://www.kenya-today.com/opinion/uhurus-british-pr-consultants-left-kenya-media-practitioners-in-a-waterloo