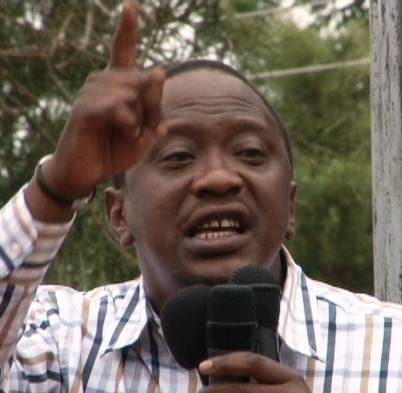 When Uhuru says that Raila Odinga is also a son of the first Vice President, he is being ridiculously disingenuous because, even though that is true, Railaâ€™s track record is what has catapulted him to national prominence, not his pedigree or surname. Otherwise if last name was a factor Oburu and Ruth would have comfortably swept into victory in Siaya and Kisumu gubernatorial race

Railaâ€™s massive popularity emanates from his determination and drive to endure and bear the burdens of the Kenyan struggles towards a nation that is free, liberated and prosperous. Whereas Uhuru has chosen the Mobutuisque warlordship route, Raila is a Mandelaisque proponent of non-violent struggle for freedom.

Hacking people, burning others a live, rape, forceful eviction and circumcising people without anesthesia are the accusations that the Al-Jazeraâ€™s beautiful, adorable and gorgeous interviewer finds unconscionable for a person to ignorantly and arrogantly shove aside and insist on running for President.

In that clip, Uhuruâ€™s lips seem covered in chimney smoke in front of a faded and creased polyethylene TNA flag that he put to shame by parading to the entire world on Al-Jazeera. Uhuru can afford iron boxâ€¦Iron the damn TNA flag.

Last time I saw chimney smoke covered lips was during a Mungiki initiation ceremony. Â Plus he is loaded a red cotton flag with a dove would have been an affordable and better choice. Stop being mean, let tailors and KICOMI get some business. Polyethylene is not GREEN for apparel. Digital?

Not a bad thing to smoke, but as a moneyed presidential candidate, there are a ton of ways to make it not so obvious. Go to a job interview like that and only a last name might help you. TNA is now a well known brand of impunity, ignorance and arrogance, thanks to Uhuruâ€™s dismal performance on Al-Jazeera.

A Nigerian friend of mine in Dubai called me and asked, â€œhow come ooh!, most Kenyans I meet are very smart, composed and organized, this dude looks confused, and unpresidential- like he has smoked somethingâ€â€¦.And I was defensive, sticking out for my fellow countryman- defending the indefensible.

I was like â€œyeah, he has smoked some cigarettes, and itâ€™s legal and within his right to do that, I was so embarrassed, that a presidential material with 30% chances of being president could put my nation to shameâ€.Â  His unclear, dislinear, and incoherent articulation was wanting for a man intent of being a Commander in Chief for a country he denies is not a banana republic.

Uhuru goes ahead and talks of Kenya not being a banana republic. Well not the women clothing line Banana Republic, but last time I checked, a banana republic is a nation â€œwhere a majority live below the poverty line, working class is impoverished, most of the time are slapped with sanctions, a nation that is surviving, not thriving, where the leaderâ€™s sole preoccupation is political survival, not national revival or renewal. Their top echelons of leadership are dominated by elites in business, which is a classic description of the PLUTOCRATIC cabal that has been vouching for an Uhuru presidency.

Maybe Uhuru meant something else but in drawing parallels between his highly unlikely regime and a Banana Republic, he was effectively recounting his premonitions, a hint of what Kenyans should expect.

As an Amherst Grad of political Science, UK knows too well that at worst, under his leadership, Kenya would be a Banana-LIKE republic if not Banana republic. The only difference would be that Kenya wonâ€™t have a single commodity to serve as a revenue stream, which is a hallmark of banana republics. All our products would be banned globally.

80 witnesses lined up against you and a horde of evidence submitted against you by the Kibaki controlled NSIS, would be a tall order to surmount if not overcome.Â  Plus just as the ambitious Ruto is widely reported to be working on a plea deal to implicate Cheramboss, Kosgey, and Mj Gen Cheruiyot, so might he sacrifice you at The Hague, so he can become President if you are jailed.

That is why Rutoâ€™s game plan of becoming President is that since he was defending a stolen president, he has higher moral grounds for acquittal than those on the side that bungled an â€œerectionâ€ like Uhuru.

Thank you Uhuru, for introducing a new term, Banana â€“Like Republic which a Jubilee Era promises to usher in. Pain, isolation, depression, plutocratic dominion of Kenyaâ€™s political system disintegration of rule of law, rollback of the gains made thus far through mutilation and dismemberment of the new constitution, etc.

Under sanctions, Miraa exports wonâ€™t happen, the Merus would be impoverished(Mâ€™Kabira, 2013), Kenya wonâ€™t afford free Primary Education, Mathare hospital would shut down with enormous consequences to families with mentally ill relatives some of them serial killers.