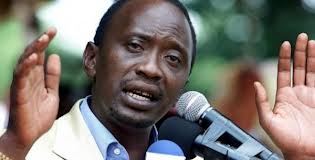 I have taken my time to observe the leaders and presidential candidate of the Jubilee Coalition, Uhuru Muigai Kenyatta for some time. The guy is smart.

Born to the 3rd wife of the founding President of Kenya, Mama Ngina Muhoho 52 years ago, Uhuru has not changed his name five to six times like his father before he could settle on Jomo Kenyatta, from his beaded belt, kinyatta! He has not also struggled for change in the society like the old man did. That leaves him a man without real enemies in both political establishments and succeeding governments.

Since his premature debut in 2002 presidential elections, the son of Mama Ngina has never been irrelevant to Kenyaâ€™s politics. He has since served as a Minister of Local Government, Trade and Finance. He has not accrued clouds of condemnations nor has he been taken to task for loss of funds except in handful mini budgets where he cited computer errors.

As the Minister for Finance, Uhuru unrolled budget to promote his prestigious Economic Stimulus Programs that addressed production and supervision of wealth. Coordinating efficiently with Minister for Planning, Hon. Wycliffe Oparanya, Uhuru worked to stimulate industries in urban and rural areas by funding varieties of human activities. That makes me think he gained convictions he is riding on today.

However is tenure at the Treasury was overshadowed by the Forex exchange scandal that saw the Kenya Shilling register the worst ever exchange rate to the dollar. The weakening of the shilling saw the ballooning of inflation and high interest rates. Inflation led to rocketing of the cost of living.

But as he vies for presidency today, Uhuru Kenyatta is overridden by inexcusable challenges. They are inexcusable because they have extensive effects on the people of Kenya, especially, if he wins the elections and forms the next government. They include these three:

The cases of crimes against humanity Uhuru and his Jubilee Coalition running mate, Samoei Ruto, have at the International Criminals Court beginning on 4th April 2013 will adversely affect their operation as leaders of the nation of Kenya. Kenyans do not want to be held hostage of their own insensible choices. Explanations of the duo that they will put strong mechanisms in place to ensure everything runs smoothly in their absence does not help the case, for, why should the nation create the two leadership positions if other institutions under them are sufficient?!

Another bad news that accompanies the ICC predicaments is embargo. Slapping of the nation with sanctions is not the good news a pair of leads would want to earn the nation. A number of leading economies have come and warned Kenyans against it here on our land. That is the reason why Uhuru and Ruto would rather talk about it in darkrooms and never in broad daylights. They came closer to talking about it when they went to woo Musalia Mudavadi to lead the campaign for them. They reneged later after Uhuruâ€™s tribal shadow rejected it.

The nation would not like to strain her relationships with the rest of the world. We do not want to be vagrants. We would not like to suffer imposed poverty like it happens in Zimbabwe today. We want to hold on the free will we enjoy in the globe. We want growth of our economy and stability our currency in place. We want our security upheld.

There is fear after Uhuru reneged on agreement he made with Musalia citing influence from â€œdevilâ€ or â€œdark forcesâ€. After he said his henchmen rejected it, Kenyans got worried of him. They remained asking; â€œHow can he be trusted to keep his promises? Will he not turn around and say; â€˜dark forces deceived meâ€™?â€ That has made even the Jubilee manifesto fall into a dustbin of doubt. Surely, will he not renege?!

The other salt that spoilt the stuff was the unison sound of his tribesmen and women that poured out with rage warning him to dare honour any agreement. When he obliged to their call to rescind it, he fell into the pit of possible tribal manipulations when he becomes President. That is not what Kenyans would want for a highly multi-tribal land. In fact, it raises fears because Jubilee in mainly double-tribal forming about 90% of Uhuruâ€™s possible votes. Where does the extra 10% put the rest of Kenyans? It dismisses mutual sense of belonging.

Someone may repulse this as incredible but it is a fact. The Whiteman of United States of America once thought that leadership of the Superpower belonged to white men alone so they named their Central House, White House, meaning; â€˜House only meant to house Whitemanâ€™s familiesâ€™. Little had they known that a mistake by a white man would make a Blackman occupy the White House as we all know today of President Barack Obama! I call it fatal selfishness.

It was like this. When George Bush Snr retired, it was a wrong thing for his son, George Bush Jr. and his wife to get onto the bed his father and mother slept in. That was what cursed America and almost swept away their power turning them into a beggar.

Today Uhuru is seeking to go the same way of Bush Jr. He wants to take his wife into the bed of Mama Ngina. That is a taboo entire African culture and tradition curse. Before Uhuru curses himself and the nation, we would prevent him from it. It is out of mutual love. We love him; we love Kenya. We want all of us to enjoy growth and development brought by efforts we make in the land. We want strength for our children, our childrenâ€™s children and the future generations.