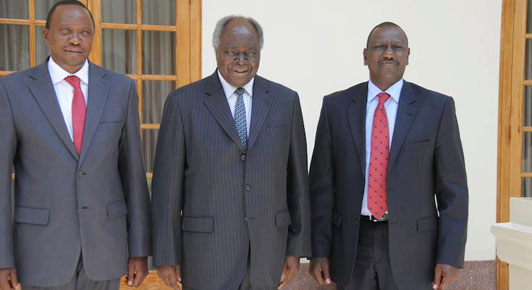 In fact, even if the Mutunga team comes up with a fair ruling reflecting the unanimous view of the nation, the reaction from Jubilee who have already tested a dose of power will be disastrous.

What with Uhuru and Ruto carrying out official duties even before the petition at the supreme court is heard and determined; they are summoning senior bureaucrats to their transitional offices at KICC seeking status updates on government plans.

Tempers are flaring more than when the results were announced. Its like a bomb ready to explode in Kenya.

People want power and nothing less. The ego; the greed for power envisioned by our friends from Mt. Kenya region is gigantic. Let us pray that peace will prevail. Kibaki wants nothing less but hand power to a fellow tribesman.

Do they really believe in diversity when Kenya is a nation of 42 communities? Why the hurry when the highest court in our land hasnâ€™t given a ruling on the election dispute?

Kenyatta betrayed Odinga soon after independence. Kibaki became President because of Railaâ€™s backing whom he later betrayed after the MOU of 2002.

He further betrayed him by rigging the 2007 elections. As if that was not enough, Kalonzo Musyoka who saved him at the eleventh hour in 07/08, suffered the same blow. He had promised to back him for the top job in the recently concluded elections.

Kibaki has used his State House Presence to build a cabal which is the genesis of the current stalemate. The cabal is working around the clock to ensure that power is held by a certain clique.
Its true, Kenyans voted for Uhuru but since there is a dispute over his victory, why the hurry? What happens if the Court rules against him?
One pundit noted on social media â€œWhereas Raila is caged at his Karen home calling for calm, peace and even cancelling his countrywide rallies, Jubilee team and Kibaki-Kimemia administration are busy setting things in motion ready for the Uhuru swearing in as if they know the outcome of the election petition or they simply don’t care!â€
The Million dollar question is; will Uhuru respect the verdict of the court or he will use the current government organs to take power minus the blessing of the highest court in our land?

I stand to be corrected but its clear that Uhuru will not go for anything less than being President of Kenya whether the IEBC bungled the elections to favour him or not. God help Kenya.
Lister Nyaringo.