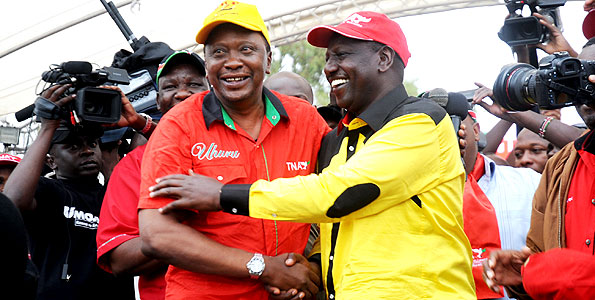 As observed in Part I of this three part series, Eugene has continued to be used effectively- by Uhuru Kenyatta as Ruto’s scarecrow for some time now, until Ruto has finally bulged and submitted to Uhuru’s whims. He gave in to the TNA machinations, because of fear of the unknown, a.k.a. paranoia of Uhuru making Eugene or MM his running mate.

Ruto’s paranoia is definitely the source of his numerous irrational decisions that have led to his poor judgments. E.g. PNU now TNA played on his paranoia towards Raila and promised him PM position once a vote of no confidence in Raila is moved. But Ngo! He was made to cause havoc in ODM but has never been rewarded.

Ruto given these issues and inability to make sound decisions needs guidance but his anathema is that he is a know it all who doesn’t listen to the few Kalenjin political advisors that he has assembled.

He doesn’t even allow his spokesman handle his media relations. Ruto thinks he is the most eloquent man. Well Good Luck. They leaked the pact, which caught you off guard. With the media, you doesn’t need to be eloquent, you just need professionalism and tact, which Ruto as a Botanist trained to identify and name plant species cannot!

Right into the jaws of TNA is where this paranoia driven lack of delegation (read dictatorship) has driven him to. I remember as a kid throwing a kernel of roasted maize in the air and then waiting for it to fall right into my wide open mouth. Ever tried that?

That’s how Ruto jumped into the ruthless and cunning TNA jaws which just like HAMAS drove out Mahmud Abbas out of power using rockets will trash the political pact they just signed once in power through an amendment of the Political Parties Act, just like the rule to allow defections was brought to parliament and TNA, UDF and URP MPs bribed to support it.

And Ruto will pay dearly for his dictatorship by warming the opposition benches in 2013 for silencing any URP MP who raised concerns at the raw deal that TNA was giving URP.

First writing on the wall- Afraha was painted red- the TNA color; meaning most URP supporters snubbed the rally. It was mostly TNA supporters from Molo, Naivasha and its environs, otherwise TNA strongholds- testament that the ACHICHA rebellion is fast gaining ground.

Its obvious Uhuru wanted Eugene as his running mate, but Ruto begged Uhuru to let him be his running mate. Uhuru believed â€“ and I think he was right- that Ruto has a ton of baggage that would make it so hard for them to sell beyond Central Kenya and a few counties of North Rift.

Now that doesnt come close to winning 51%, not even 35%, that is why smarts like Eugene Wamalwa, Kalonzo, Tuju, Ngilu and so on bolted out of the sinking ship and grapevine has it that they are talking to the PM with the possibility of forming an unbeatable coalition capable of marshalling more than 62% in the first round. Guys are pissed off with UhuRuto.

Now you have a leader of a party who claims national outlook, but before signing an agreement with huge implications and ramifications to the whole nation, only seeks permission from his handpicked tribal decision making body- a few handpicked individuals in traditional regalia who claim to be elders.

So you have two tribal groups of elders meeting and endorsing a deal signed by two chieftains, who lead outfits that they call parties, but which are actually not national parties- TNA and URP. So you have two numerically huge tribes alienating the other small 40 tribes by sharing out all government positions 50-50. That is not national unity and is where we don’t want our country to go back to. That’s a dangerous policy that Uhuru and Ruto are pursuing.

Now that is reverse tribalism being sanitized using the Political Parties Act. Itâ€™s akin to using proceeds from drug or illegal arms trade to buy shares from the stock exchange, then reporting it as Stock Exchange proceeds- earnings from your sweat.

Ruto claims to be young, but he is taking us back to the 50s style of doing things when we had Young Kavirondo Association, Kikuyu Central Association, GEMA and so on and so forth. Kenya has to forge forward and not be held hostage by an opportunist chieftain out to con Kenyans into undeservedly controlling 50% of the government. Already G7 is down to G2. Good luck man, but from the mood on the ground, the URP/TNA agenda shall be defeated in a landslide victory for Raila led Coalition of the small men. People are pissed off.

Come March 5th when the results start streaming in, the obituary of Ruto’s political career will have been published as Kuttuny, Rutto, Keter etc dump him and scatter to the four winds. He would be of no use to them anymore.

Ruto is running mate, and so without a seat in parliament he will come out of all this grandiose delusion empty handed.

Like tissue paper, URP MPs- comfortable in parliament would have like tissue paper used, dumped and left Ruto for the dead. To the Kalenjin, he would have for an umpteenth time betrayed them, like he did in 2002.

It’s even worse because the elders warned Ruto, and the chants of Achicha failed to appeal to his conscience. Â The PM of the Republic of Kenya drove himself to your friend’s house and appealed and even sent elders to you, but you rejected the overtures. To cap it all, the fountain of humility apologized.

Like a materialistic girl, Ruto preferred the one who represents class and wealth to the one that represents the peopleâ€™s aspirations, the one who chose to represent the filthy poor of Kibera. Reality will hit Ruto on March 5th. And with it regrets galore shall come abound. But it will be too late for more night meetings.

But I blame Raila for spoiling you and Mudavadi, such that when you abandon him at his hour of need, he always like prodigal sons forgive you with his fatherly warm embrace when you come back to him running. He is forgiving but if it were me, I would let you fry in your own oil like pork.

The People’s army of the millions of safari ants shall defeat the coalition of 2 snakes that have for long terrorized inhabitants of this great nation. You might be big, but look- Nyachae once lost his entire political empire that he had built over 50 years for misreading the public mood. Awori lost even his seat in parliament in 2007 for going against the Peoples’ president. Didn’t even deliver Western, so did Mudavadi in 2002.

People are brought together by issues, not positions or tribes. That is why Raila can still win even with Kamenchu as running mate. He is that strong on issues. Stronger coz he commands an army of safari ants lined up against snakes.

Kenya has to be one. It has to be united, 42 under one God, united by 4 colors of our flag- Red, Black, Green and White. There’s no doubt that Raila will not treat us to those types of tirades, coz my belief is that Railaâ€™s coalition would be about the nation, not a conglomeration of chieftains.

You don’t have to bring a huge voting block to the table; all you need is a good resume, good ideas for the nation and is able to pass the integrity test, that’s all. Full stop.

This is part II of a series that will continue until new information -on how Ruto was duped into signing a lopsided pact that effectively gets URP swallowed by TNA- stops coming in. It is going to have as many parts as information comes in. It might as well become a book!