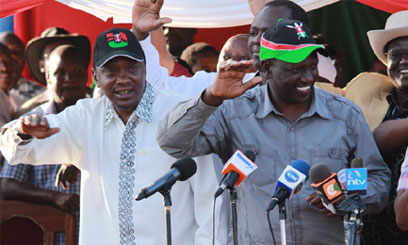 David Petraeus, the Obama CIA Chief who resigned last week was a larger than life celebrity US Army 4 star General, PhD holder and soldier-scholar who had such a sterling military career.Â He spent his last decade in the mine laced bomb fields of Baghdad and Kabul.

His philosophy on counterinsurgency, and which he executed in Iraq redefined how battle can be won in the 21ST C 360 degrees unconventional warfare, and which KDF must have borrowed heavily from in its Al-shabaab onslaught.

The military genius had morphed into what future President 5 Star General Dwight Eisenhower had become while Supreme Commander of Allied forces during World War II.

Media savvy, shrewd, smart, athletic, disciplined, strategic, scholar name it- any ticket with â€œKingâ€ David Petraeus â€“ a military hero- would have been a game changer in the 2016 US Presidential Election.
However, the career tower he had built for about 4 decades came down tumbling like a house of cards not because of crimes against humanity but because of a mere extramarital affair.

The Uhuru-Ruto lesson from this is that despite the Generalâ€™s rosy resume, the moral angle to his affair was sufficient for him to have the audacity to resign even before the legal perspective had even surfaced.
He chose to not allow his own â€œpoor judgmentsâ€ to bring down an entire spy agency. Here at home The Uhuru-Ruto pair is willing to have the entire nation go down with them. That is selfishness, not patriotism.
â€œKingâ€ David, as Iraqis had come to call him resigned because his actions not only raised serious moral questions but also predisposes an office-holder to the biblical â€œDelilianâ€ enticements which led to Samsonâ€™s vulnerability.

The argument is that the woman could be used by enemy intelligence agencies to blackmail Gen. Petraeus to obtain vital intelligence information.Â And to keep closets skeletons-free is why top secret organizations discourage their staff from engaging in acts like pornography and prostitution.Â A classic example is the well documented story of Pentagon officials who when found watching pornography, were fired.

It is for the same reasons that Obama Secret Service agents and soldiers who engaged in prostitution while in Cartagena, Columbia were given disciplinary action.

The philosophical thinking is that such behavior pre-disposes them to quid pro-quo compromising situations, where mischievous people lure them into online â€œpornography sitesâ€ then tell them, hey I know what you watch while at work, so do this or I will do that.

A case at the ICC is definitely a skeleton in the closet. This makes Uhuru and Ruto Presidencies a serious threat to Kenyaâ€™s national security.

Smart security operatives will tell you that any â€œskeletons in the closetâ€ like a case at the ICC is a compromise on security. It predisposes a President to International or diplomatic blackmail.

The reason why top security organizations disallow â€œpornographyâ€ and â€œprostitutionâ€ is to protect their staff from being compromised.

A case at The Hague is definitely a â€œskeleton in the closetâ€ and predisposes The DPM Uhuru Kenyatta and William Samoei Ruto to blackmail from enemy and powerful nations.

Unlike with Kenyans, Petraeus without wasting time had the audacity to resign even as FBI said he is not the target of investigation- but he resigned anyway.

As ICC accused, Uhuru and Ruto are under investigation. Just like FBI stumbled on the Petraeus affair while investigating his Biographerâ€™s harassing email to another woman, so is it possible for The Hague investigators to also stumble upon vital state secrets.

Petraeus- a military hero is a darling of millions of Americans and a 2016 Presidential material who had the Clintonian capital to put up a fight, but he bowed out anyway.

Kenyaâ€™s moral dilemma is that Uhuru and Ruto seem to be actually pursuing a higher office, when actually they ought to resign from the offices that they currently hold, not necessarily out of legal considerations, but due to moral considerations.

Take home from this is that like in Petraeus case, patriots put country before self. When Uhuru-Ruto pair insists on running, they are not putting Kenya before self. It is selfishness, not patriotism.

Sospeter Otieno is a Freelance Columnist, Security expert, activist and blogger who lives in the US.