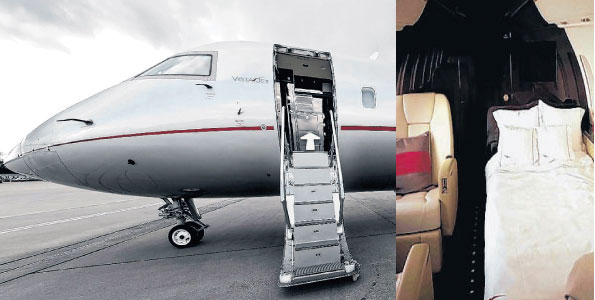 Uhuru Kenyattaâ€™s government has been trying very hard to tell us that it will meet its election pledges, events of his FIVE week administration show a very different scary picture- a government that is slowly embarking on wastage of public funds!

Â In one of the two presidential debates in February 2013 then candidate Uhuru Kenyatta attacked retired Prime Minister- the Peopleâ€™s president-Raila Odinga of expensive trips abroad that cost tax payers money. In a record five weeks even before cabinet secretaries take over their official duties, his deputy William Rutoâ€™s office has hired a luxury jet for his travels across the continent in a deal which will cost taxpayers up to $300,000 (Sh25.14 million) every three months.

Â The payments across the year for the use of the jet will amount to $1.2 million (Sh100.56 million). A move that has angered many going by discussions on social media, Mwalimu Mati of Mars Group is of the view that the government should halt trips abroad which will cost the taxpayer millions of shillings.

â€œThis is totally outrageous,â€ he said. â€œWe already have a presidential jet at the disposal of the President and his Deputy. Why hire another one when you have already bought one? The President should live up to his word that the government will not be a gravy train and stop this.â€

An initial list indicted that Mr Ruto was to be accompanied by 14 people including politicians and aides, his security team will most likely be more than 10 since he is visiting highly risky countries.

The plane which Mr Rutoâ€™s team flew in lives up to its reputation as a luxury jet.

Rutoâ€™s trips will be mainly to failed states with whom Kenya has no meaningful trade ties in what the Star newspaper described as a shuttle diplomacy.

Â â€œApart from discussing government business he will also raise the ICC issue,â€ said a source familiar with the trip on Thursday. Kenya has already held discussions with all East African leaders and secured promises of support for changes to the ICC system.

Â Ruto left the country on Thursday on a private jet for Democratic Republic of Congo, Congo Brazzaville, Gabon, Nigeria and Algeria.

Â Of what benefit are trips to countries like Congo Brazzaville, Gabon and Algeria? It is obvious that Rutoâ€™s travels to Africa capitals are more to do with ICC than trade, as a war crimes suspect no country will trust him hence its nothing but a waste!

The Hague-ICC trials are turning into a national tribulation YET we know it is a personal one! So, how much will we spend on ICC trials?

Â With MPs salary set to go up, Uhuru is also said to employ a dozen political rejects the likes of Kutunny, Ongeri, Mungatana, Tuju, Makwere,Kaparo et el as special advisors (rank higer than Principal Secretaries) will balloon the recurrent expenditure at the expense of capital expenditure (development projects)

Â Powerful people in government are also keen on frustrating devolution as county commissioners are still in office and Treasury is dragging its feet. So, where will laptops, school milk, jobs for youths et el come from? ACCEPT AND MOVE ON!

Â No matter which party or values you ascribe to, the cost of living is affecting all Kenyans in a country where both the president and his deputy earn more than their counterparts inÂ  Brazil, Russia,Turkey, UK, France, USA et al yet these countries are donors to Kenya.

Can Ruto spare the luxury and instead help this lady from his stronghold- a victim of PEV? Where is mama Rachel?