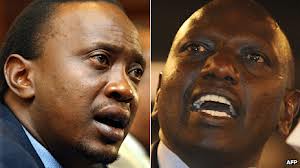 Even though I have ethical, moral and fundamental differences about the direction that Kenya should move, of the two principals, itâ€™s clear to see that Rutoâ€™s ineptitude and ineffectiveness as manifestly evident is pulling Jubilee down.

His nominees even though academically qualified, were lacking in color during the vetting that even the MPigs noticed. You must be really wanting for the Mpigs to notice.

But as usual, the MPIGs chose to endorse their contemporaries, because, ladies and gentlemen, the fight in Kenya has always been a moral war- a class warfare between those who continue to derive pleasure from the system, versus those on whose pain the haves gain.

Mpigs by endorsing RUTO’s questionable characters demonstrated that they are only concerned about retaining and perpetuating the status quo.

To them, Chapter six is an inconvenience that they will unanimously connive to contain, in unison; otherwise they will be hung separately by it.

And their point of confluence over the 2 characters, their FRASS notwithstanding, can only be found in CLASS.

From the party nominationsâ€™ fiasco, to voter bribing allegations against winners in the last elections by various sore election losers, MPIGs are beneficiaries of the system.

Most of them are also men and women of means especially given that the average campaign budget for an MP is a whopping KSh 10m.

The decision to approve Kandie and Chrichir despite overwhelming evidence that their pasts are questionable; MPs are keen on lowering the bar of integrity to a level that they can touch.

That at a time when they are focused on raising their salaries, they are sending a message to the executive that “we can do business together”. Â MPs appear keen on crafting as large a coalition of “likeminded persons” who will help them get their way, in all spheres of government.

Watch out for those weird Cabinet Secretaries who will seek a miscellaneous budget, christened â€œMpigs enticement budgetâ€ replete with lobbying consultants and/or departments.

To UHURUTO their message is that “we have overlooked the integrity issues in your nominees“, to the new cabinet, “look we have gone easy on you”. Â The message to the executive arm of the government was unequivocal on the floor, that we can do business together.

Not a single message I know of was or is intended for the common man. Like a riley, the baton was handed by the Judiciary, from whom Uhuru derives his much queried legitimacy. Then the executive sent its names, and without drama the entire cabinet was approved.

Itâ€™s scary that thereâ€™s no acrimony in between any arm of the government, none of the arms is checking the other as stipulated in the constitution. Rather they are all in a synchronized dance, or do we call it the â€œEvil Trinityâ€.

Now this is what we call national unity. A re-incarnation of the Jogoo dejure single party state. All for the sake of maendeleo.

And on a day that the gory and nasty scenes of pigs fed on blood collected from the slaughter houses of Matasia had barricaded the house, I think MPigs have developed an incorrigible and irreconcilable hate towards the Kenyan masses who are united in what my learned friend and the god of the MPigs clamour for more buk Mithika Linturi is calling â€œimpeding on our rightsâ€.

Last time I checked astronomically high salaries at levels umpteen times the per capita income are a privilege not a right. Tell that to Linturi, Dualle and Muturi.

And in a Presidential Democracy MPigs are elected to advance, defend and propagate individual freedoms of their constituents, not their own.

Linturi be reminded that the OCCUPY PARLIAMENT Movement {like in the French Revolution against the arrogant aristocracy and feudal classes} is about rooting out the greedy and bad manners accumulated by MPigs over the years.

Herein after follows my concerns about some of the URP nominees; that MPigs rubber stamped:-

First you have a dude who has risen through the ranks of Kenya Ports and Kenya Posts/Telecommunications, 2 organizations whose tradition of sleaze is in the public domain, until the latter had to be made moribund to give way to a new entity.

Then we have this dude who rose through the ranks of Treasury since the days of Moi repression of the 90s.

Then of course, when you know how Ruto made his “dollars and sense”, itâ€™s not difficult to see why Hon. Ruto has stuffed his half of the cabinet with folks who appear to me like his “boys and girls of terror”.

Kandie, Chirchir, etc appear like they are being rewarded for a job well done over the years, in helping Ruto accumulate his Billions.

Phyllis Kandie looks like that innocent girl but wait until you read an eye witness account of what the link http://www.nation.co.ke/News/politics/MPs-differ-over-two-Cabinet-nominees-/-/1064/1851592/-/k58vlaz/-/index.html describes as fleecing â€œJua Kali Artisans, women Groups and money meant for Poverty Eradicationâ€. A woman who is alleged to have stolen from poor village women, who live on less than a dollar a day just sneaked through a shoddy vetting process.

For a man who has been on and off the court over corruption allegations, Ruto appears willing to stuff his half cabinet with folks who are â€œlike-minded personsâ€.

By picking government bureaucrats, Ruto appears keen on not only re-inventing, but also re-invigorating, rejuvenating and revitalizing the status quo. Reincarnating the 90s Kanu ways of doing things. The state in which he made his gains without pains.

And for man who has made it thus far at a young age, Ruto is clearly betraying his generation. He is the greatest threat to the attainment of the youth agenda and the Kenyan dream, yet the most vocal about his commitment to the youth. Yet none of his nominees were below 35, the arbitrary definition of youth.

The mother of all evils, is of course the 2 politicians who have time and again been mentioned in corruption scandals, now these ones had to go through, because MPIGs do not only want representatives in cabinet, but also they want to set a precedent that will culminate in MPigs who lose in polls getting a lifeline as cabinet members.

Thatâ€™s the ultimate finis-punctum that MPs are keen on orchestrating. A Utopia where MPigs have another “life after death in polls”.

The fantasies of an MPig is a world where they can have their way in pay increases, and sulk as evidenced by Mithika Linturi whenever the poor masses attempt to have their say by stopping the illegitimate pay raises.