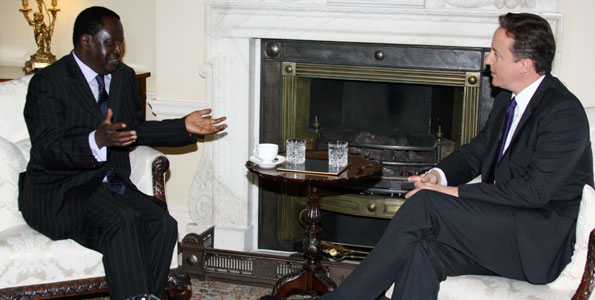 By: Ibrahim Kosgey in London

Kenyan Human Rights Activists have been angered by the hypocritical manner with which the British government has made a U-turn against their stands towards the Kenyan government.

They are warning that British Government and the wider Western governments that they saw this coming; the damning ploy of the ICC suspects using their fear of terror and threats of shifting trade allegiances to blackmail them.

They feel that this is deeply insensitive of the current David Cameronâ€™s administration and in breach of international laws principles considering what is going on in Syria.

Â It also undermines the cases of thousands of families that were affected in horrific crimes against humanities like in Kenyaâ€™s last post election violence.

The Activists are engaging their International partners to organize demonstrations outside the venue of British-Somalia Conference where President Uhuru has been invited.

British policy of only “essential contact” with anyone charged by the International Criminal Court (ICC) appears utterly farcical now that a suspected criminal has been personally invited by Her Majestyâ€™s government to the UK.

Although it is unclear whether Mr Kenyatta will be honoured at Number 10 Downing Street where the British Prime Minister meets distinguished guests, Mr Bradshaw said arrangements for everything else in the tour were still being firmed up.

A Whitehall source said that having Mr KenyattaÂ at the conference “is seen as essential” and since they have both vowed to cooperate with the ICC courts we will take them on their word.Mr Bradshaw said.

Â The British High Commissioners spokesman said in a statement: “Kenya plays a vital role on Somalia, having nearly 5,000 troops in Somalia, and hosting more Somali refugees than any other nation.”

Uhuru will be travelling to London tomorrow on Sunday in readiness for the Somalia Conference starting at Lancaster House on Tuesday as a follow up to the last February one that brought together all the E. African regional leaders.https://www.kenya-today.com/