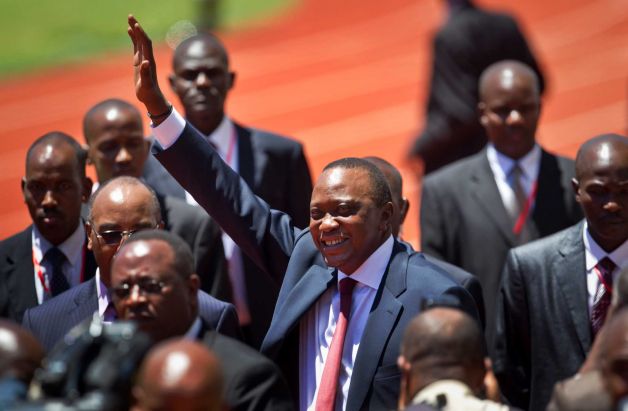 The richest man in Kenya is now its leader and in his first address has indicated that he is viewing our problems from a distinctly economic and technological angle. Throughout the inauguration ceremony, we heard promises of double digit economic growth, free laptops, free maternity health, a fund for women and youth.

But the events of the last month have exposed have exposed deep rifts in the national psyche that cannot be papered over with money alone. President Uhuru Kenyatta, to his credit, recognized that his election has divided the country but saidÂ little on how he was planning to undertake the process of reconciliation. He would do well to go a little further. Though he is the lawful President of Kenya, he should acknowledge that the election, in the manner in which it was conducted and adjudicated, has not only alienated a significant proportion of the population, but has harmed the credibility, if not legitimacy, of his victory. There is thus a large disaffected constituency he will need to actively win over, if he is serious in his desire to be the president of all Kenyans.

Vague appeals to national unity, to moving on and working together are not enough. His government must demonstrate the will to reform the flawed electoral system that has brought him to power. As he works to deliver laptops to primary schools, he must also insist on a full and comprehensive audit of why all the systems set up to guard the transparency of the election failed. After all, many were deployed in these very schools.

It was also encouraging to hear him talk of “a permanent peace through which democracy is glorified and not undermined” as opposed to “a perfunctory peace” that is held hostage to the five year election cycle. Than in itself is a valuable acknowledgement of the spell of fear and paranoia that has swept the country over the last month and that is beginning to be buried. I hope he also recognises that this national pathology has deep roots in traumatic historical events and outcomes that the country has avoided confronting for the last five decades. If he truly wants to get rid of it, he must not allow us to move on until we have truly come to grips with it. I hope his administration will begin by lifting the ban on public demonstrations to allow the people opportunity to peacefully vent whatever frustrations they may be harbouring. After all, he did declare his commitment to the protection of fundamental freedoms. I hope he will not seek to roll back the gains won over the last 20 years.

The report of the Truth, Justice and Reconciliation Commission, which is expected in less than a month, should provide another perfect opportunity to further this work. However, that will require a commitment to truth and justice. Given how his election campaign has, with more than a little success, sought to disparage and deligitimize civil society organisations that advocate for justice and good governance, as well as the accusations of interference with witnesses at the ICC and the personal cost he would bear if the prosecution were to be successful, many are understandably sceptical about his resolve in this regard. But perhaps with the heat of the electoral battle now fading, and with the case against him at the Hague looking less likely to succeed, he may decide to surprise us all.

Will we now see a let up in the assault on civil society, the bedrock of any democracy? Will we see moves to provide some semblance of local justice for the hundreds of thousands of victims of, not just the violence of 2008, but of the political violence that has accompanied every election since 1992? They, sadly, didn’t merit a mention on his speech. Will he be committed to justice for the millions more who have been impoverished by the succession of corrupt and greedy regimes that begun with his father’s and whose policies have bequeathed him much of the wealth he enjoys today? Not having mentioned corruption once in his speech, does he consider stamping out the vice a priority and will he be able to resist the vulture “businessmen” associated with his own campaign?

In a very real sense, if President Uhuru Kenyatta is to live up to his promise of working towards “a rich and abiding peace,” he will have to confront the very system that has put him where he is. He, perhaps even more than the rest of the country, would need to confront and expose painful realities about the conduct of his family and its old friends. He would have to live up to his name and free himself, and thus his countrymen, from the shackles of the past. If he found the courage to do so, he might just be the best thing that ever happened to Kenya. So, Godspeed to him.

But we all know that this is unlikely to happen. The likelihood is that President Kenyatta will, like his predecessors, have little interest in justice or fighting graft. Instead he will, as he has already done, continue to urge us to get back to work, to build the nation, to forget the election. He will seek to bribe us and buy our loyalty with free goodies and he will continue his campaign to undermine both the ICC and local civil society. Whether he succeeds in this will be up to the rest of us.