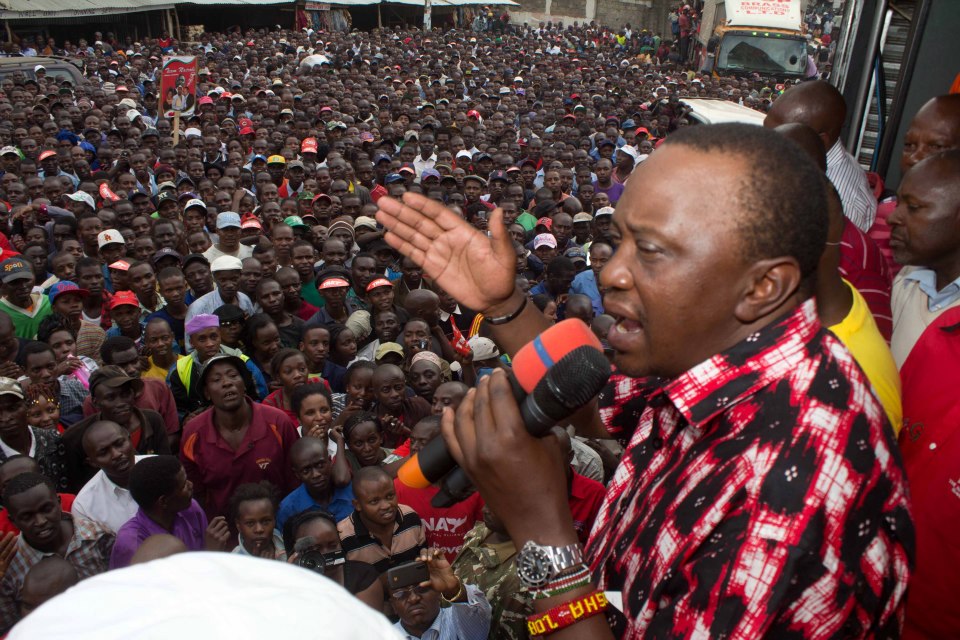 Uhuru Muigai Kenyatta is a man with a mission; he wants to lead Kenya not just from statehouse but also from the ICC via Skype!Â  Controlling the Mt Kenya and parts of Rift Valley voting blocs; the Jubilee presidential candidate is at the brink of capturing the presidency. Mutahi Ngunyi in his much publicized tyranny of numbers- tribal arithmetic, showed how Uhuru is a regionalist with huge tribal following in Kalenjin and Kikuyu communities.

It is no secret that Jubilee Alliance has thrived largely on ICC and related propaganda, reason why Uhuru and his deputy are not popular beyond their tribal bases. Kenyans cannot precisely place the Jubilee coalitionâ€™s political ideology.Â  All Kenyans know is that the two were warlords during the post election violence period in 2007/2008 and their mission is to stop Raila Odinga from becoming president.

The Jubilee manifesto that was launched with pomp and colour has been poked holes, some experts have termed it a sensational piece with little to write home about. An example is the importation of thousands of tractors to cultivate land yet majority of Kenyans are either landless/squatters or own small pieces of land, giving of computers to all school going children while 80% of the country has no grid connection(electricity) among other clearly unrealistic promises

Kenyans are scared of Uhuruâ€™s incompetence to manage affairs of the government, his colourless tenure as Minister for Finance is a testimony, during his short stint at the Treasury the economy plummeted, shilling lost value to the dollar hitting the lowest ever in countryâ€™s history , hyperinflation, rise of interest rates and general rise of the cost of living that is not in tandem with the prevailing standards of living. Prices of commodities doubled, while standards of living among the regular folks got worse.

The Kenyan middle class shoulders most of the bills especially for elderly and extended families in the village; this is why effective economic management track record/credentials are fundamental for many in this election and a candidate that demonstrates economic prowess shall win the middle class vote- the engine of the economy.

To the middle class itâ€™s going to be that candidate who truly espouses the letter and spirit of free Healthcare, and pension scheme for all over 65 yrs. This is because, Jubilee sanctions guarantee increased shouldering of burdens of the elderly and the sick relatives in the village by the middleclass. Sanctions will wipe out the middle-class. In sanctioned or banana republics, there are only 2 classes, the rich bureaucrats who loan the government, and the poor who are extremely poor. I donâ€™t know of a sanctioned nation in which the middle class survived.

Uhuru Kenyatta despite his youthfulness (at 51 years of age), affluence, opulence and eloquence has not attracted support beyond two tribes in a country of 42 tribes; were it not for the ICC trials, could have Uhuru attained his current status? Now that Kenyans have known truth about ICC (that UhuRuto voted for the ICC against Railaâ€™s proposed local tribunal) will playing victim consolidate tribal sympathy or following?

Here are things Uhuru should avoid if he wants to get support beyond two tribes in Rift Valley (Kalenjin) and Central provinces.

1. Avoid playing victim â€œvote for me otherwise Raila will finish me.â€ This is an old line, it helped Uhuru reach where he is BUT will NOT take him where he wants to be. The momentum among the Kikuyu is weakening; they need new lines. To Jomoâ€™s son; if you really caused the killing on innocent children, women and men during the PEV, then you must face justice. Mzee Jomo never cried for protection.

2. Stop telling lies like â€œKenya will prosper by trading with China & rest of Africaâ€; we know this wonâ€™t work as the Zimbabwe model is a not a verifiable example. Kenya can only develop by trading globally. China is exploitative in the long run. Kenya needs the West!

3. Stop issuing empty land promises to squatters. In 2002, you promised Taveta squatters land. They are still waiting. Your cousin Beth Mugoâ€™s tried it again two weeks ago but the locals called it a bluff. You were forced to cancel a Jubilee rally in Wundanyi on Saturday 16th Feb 2013 after intelligence reports advised that locals will be hostile. Meanwhile Jubilee rallies in Kwale County were poorly attended. Kenyans want land reforms. You must be seen to be honest in making promises!

4. Acknowledge and apologize for the economic mess during your tenure at the Treasury. As finance minister you failed to administer proper macroeconomic policies together with your friend Prof Njuguna Ndungu of CBK. Kenyans have not forgotten how the Shilling lost its value to dollar.

5. Remember to apologize to Mau evictees for withholding the government resettlement money approved by cabinet, which you refused to release just to frustrate and cause tension between Raila and Ruto. Why was cash compensation for non Kikuyu IDPs only 10k as compared to Kikuyu IDPsâ€™ 35k? Why were Kisii/Luyha IDPs given only KShs 10,000 without land for resettlement? Were they less deserving by virtue of their tribe?

6. Stop spending a lot of money on a lavish campaign. Most voters are poor. They will think you will recover the money from state coffers if elected. Already, some pundits are alleging China is financing you. Kenyans know you are the heir of the massive Kenyatta Empire. It is a pity that you are spending billions on campaigns while jiggers and extreme poverty terrorize your neighbours in Gatundu.

7. Avoid speaking Gikuyu in rallies, like you did in Dandora, right in the heart of the city of Nairobi. It alienates other tribes. You scare other tribes whenever you address rallies in cosmopolitan areas. The last time you spoke in Kikuyu in 2007, we know what happened especially in Naivasha. Nationalists have ambition beyond tribes.

8. Make a firm and unequivocal commitment to accept defeat if beaten and to work with ICC even if you win. It shows sincerity.

9. Deny publicly that senior civil servants are working for your campaigns especially the Director General of NSIS, the Chief of General Staff and Head of Public Service.

10. Clarify that the 50-50 sharing of power between you and William Ruto is not a two-tribe affair locking out all other tribes.

Address those 10 points, you will get votes from other tribes come 4th March 2013. The votes may not be enough to see you over the 50%+1 mark, but it will be a good foundation for your 2017/2018 presidential bid. Wish you the best and remember Kenya is bigger than two tribes!