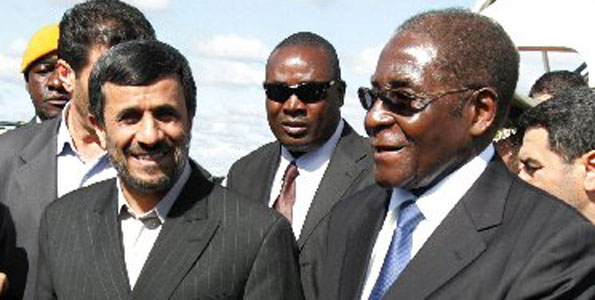 The recent ODM Delegates Conference, ODM showcased an international figure, Morgan Tsvangirai whose election was also stolen by a sitting president Mugabe who swore himself despite losing.

When political movements in different countries are faced with similar challenges, they tend to console each other. Martin Luther King and Malcolm-X sought technical and material guidance from the colonial Pan African movement.

Itâ€™s against this backdrop that ICC Suspectâ€™s led Jubilee Coalition wants to issue a counterpunch to ODM. They intend to showcase their international connections to the Kenyan people.

That is why they intend to invite to Kenya top leaders of Hamas to grace their upcoming delegates conference.

Now Hamas- though a designated terrorist organization just survived and actually emerged stronger out of a war with a mighty and sophisticated military power- Israel.

This was against the background of sanctions and international isolation which at times almost crippled Hamas due to shortage of resources, leading to discontentment of its Palestinian people.

However, its survival against sanctions, Israeli airstrikes and isolation by the international community makes it the only organization that Jubilee think tanks who include Jasper Mbiuki and Farida Karoney among others feel that a potential Jubilee government would have the most similarities in challenges and therefore lessons to learn from.

Hereâ€™s the reason. Due to the threats of sanctions by Hillary Clinton not to mention Koffi Annanâ€™s opinion that an Uhuru or Ruto presidency would be a diplomatic challenge- the possibility of sanctions makes Hamas experiences the closest to what awaits a possible TNA led government.

Like with Hamas, Washington has also indicated that it would be at a moral dilemma in working with an Uhuru led TNA government.

When Washington, its like minded Western capitals plus the small fish scared of airstrikes or offending Washington cannot do business with you, effectively makes you â€œsanctionedâ€.

That is what it means. Hamas is sanctioned, and its ilk Jubilee government under Uhuru and Ruto would most likely be sanctioned. These 2 organizations can learn from each other.

That is why besides meeting regional leaders in Eastern Africa and in the spirit of working ahead, Jubilee think-tanks find it strategic to work with HAMAS.

A working MoU with Hamas Leaders would be of immense lessons to Jubilee as a party on how it can surmount sanctions and international isolation in 2013- as most analysts and international opinion shapers predict. This they believe will be a killer response to CORD for getting Morgan Tsvangirai, Zimbambwes PM and owner of the countryâ€™s half loaf of govt. to attend its NDC.

From Hamas leaders, URP and TNA ideologues could be apprenticed about the mechanics of gaining a degree of legitimacy in the face of sanctions and international isolation as is expected to befall Kenya if Uhuru were to become President.

Following the signing of a ceasefire with Israel, Hamas is a story of diplomatic success in the face of sometimes insurmountable adversity.

However, Hamas was emboldened by the rise of Islamic governments in the Middle East following the Arab Spring- most of them like the Muslim Brotherhood who while in charge of the Egyptian Government brokered the deal between Israel and Hamas under the urging of US President Barack Obama.

That The US Secretary of State Hillary Clinton relied on Egyptian President Mohamed Morsi- a Muslim Brotherhood ideologue in Egypt to broker the Israeli-Hamas deal is something that Jubilee advisors have taken note of.

It teaches Jubilee how an organization that was just several months ago being billed as an extremist Islamic group whose government, Washington cannot do business with can transform itself into international and geopolitical relevance.

Jubilee leadership may include a visit to Morsi during their Middle East Sojourn. Remember Muslim Brotherhood leaders had also been blocked from running, and Morsi became the compromise candidate, as such they could also learn how to overcome the possibility of being blocked from running.

TNA/URP also expects its government, to be inundated with uprisings and demonstrations like the Egyptian Muslim Brotherhood govt. led by Morsi. So they expect to learn from each other because they are birds of a feather. Mugabe also features highly in their foreign policy public relations gimmicks.

The working together between elements of Muslim Brotherhood with the US Secretary of State to broker a deal in the Middle East just shows how in international politics, like in Kenyan politics, when the stakes are high and time is of the essence, there are no permanent friends or enemies.

Muslim Brotherhood, by working with Washington to broker the Hamas Israeli ceasefire, proved that in diplomacy it is common interests that bring people together, even when walls of ideological leanings rise high between such parties.

With lessons from Hamas and if what Annan and Hillary Clinton said about sanctions is true, Uhuru/Ruto Jubilee expects to learn how to survive sanctions, and possibly airstrikes in the event that it forms government in 2013.

Rashid Wanjala comments on topical issues and opinions expressed DO NOT represent the views of Kenya-Today.Com.