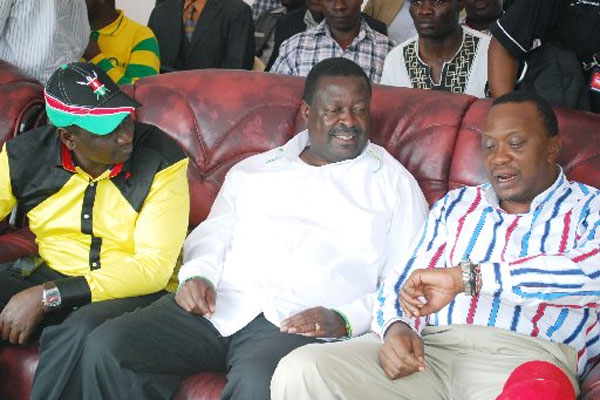 That Mudavadiâ€™s Boss in the Jubilee Coalition Uhuru Muigai Kenyatta is a master tactician is not in doubt.

Uhuruâ€™s junior partner in Jubilee Musalia Mudavadi once coined the phrase â€œwe have them by the ballsâ€. Well this time, the kamwana has him by the balls. And he is squeezing them hard. Mudavadi would think that Uhuru is using pliers, but no, itâ€™s just his fingers, the thumb and the index finger.

Itâ€™s just a matter of time before Mudavadi gives in to the squeezing, because things donâ€™t seem easy for him. He is not a match to Uhuru Kenyatta who has more spine and stamina than the political weakling and contender for puppet called Musalia MaDVD.

Those who bought him out, the investors now want their returns on investment. It was a loan, and he now has to pay it back and kindly so.

Kasarani , they call it, is the day when Mudavadi will be humiliated. Too bad because CORD was willing to make him Majority Leader, the same position that UK will offer him, Â but turns out that would be minority leader, because Wetangula is the next Majority Leader, because CORD would have majority. â€œIf he wants peaceâ€, otherwise, he would have to repay all the investments used to maintain his project thus far.

Mudavadi is a cornered man, who has effectively been outwitted by Uhuru, the Jubilee Master Tactician.

Now here are the negotiation tactics employed by the Moi Student:

DecemberÂ  4th, Uhuru panics on seeing the Railonzo Pact signing ceremony, and approaches Mudavadi Â , with an offer of Majority Leader if he plays ball.

Mudavadi declines and insists on presidential ticket. Uhuru, the Forbes listed richest man in Kenya offers to refund Mudavadi all expenses accruing from his UDF campaign expenses including the 50 Pounds per person he bribed Kenyans in London to attend his UDF Diaspora meetings et el. (It is rumoured that Uhuru has spent so much buying defectors that he fell off the 2012 forbes list, and overtaken by Naushad Merali).

As the 4th December day proceeds, Mudavadi decline House Majority Leader position, and Uhuru offers to talk to Ruto about relinquishing VP slot if Mudavadi announces the decision to join Jubilee. Mudavadi insists that it has to be 33.33% failure to which thereâ€™s no deal.

Uhuru tells him, ok, I will give you 33% because thereâ€™s not a third of a person or 0.333 of a human being and so stop being silly about that, but then call a press conference and withdraw in my support if we are to cede percentages to you.

UhuruÂ  in fact while shaking off ash from his cigarette, tells Mudavadi that he is willing to relinquish more percentage if he agrees to be running mate. At this point, Ruto is willing to step down and be majority leader. Mudavadiâ€™s fear of Majority Leader is his trauma of 2002 when he was defeated by NARC candidate Moses Akaranga whom Kanu operatives like William Ruto and Gideon Moi financed heavily. ODM has a strong candidate on the ground already in Vihiga. Plus you are not even sure whether Jubilee will win majority. The recent gerrymandering that increased constituencies favor ODM and Mudavadi is scared of Majority Leader empty promise. You have to be MP to be majority leader. Then of course, this time the people of Western wonâ€™t forgive him. He cannot lie to them again!

Uhuru as a way of pressuring Mudavadi WARNED him that if he didnâ€™t take up the running mate slot by close of business (COB) on the 4th of December, then Ruto shall forever never relinquish the VP slot. This was meant to scare Mudavadi into thinking that the door would shut on him. Mudavadi gets so scared, starts to think hard about signing that deal, especially on seeing the CORD crowds that had graced the Railonzo signing ceremony. (He also took note of Wetangulaâ€™s representation of Western interests. He is now about to pee on himself. Ruto in the presence of Uhuru never raises a voice, he has been boxed lately. Carol Mutoko wondered whether Uhuru is using herbs, but the issue is Mudavadi is concerned when he is with Ruto alone, Ruto is very frank and open, but when UK is there,Ruto folds his tail. Ruto of 2012 is not the person Kenyans are accustomed to. He panders to Uhuru. He freaks Uhuru.

Then Mudavadi talks to his advisors, and they advise him to take the risk because their predicament canâ€™t get any worse than it is â€œright nowâ€. It would be a shame to be parading a coalition with Tuju and Kenneth, we would look desperate. Mudavadi had nothing to lose in any arrangement, he could either count on State House to arm twist Uhuru at some point, or delay the shame of playing 3rd fiddle to Uhuru Kenyatta.

Mudavadi after consulting Kituyi and Ngunyi, demands Uhuru for a contest for presidential candidate slot, with the loser taking the Majority Leader slot.

Uhuru on consulting his kitchen cabinet is advised to â€œcross that bridge firstâ€- fix Mudavadi to their Jubilee jinx. â€œWe will cross the main bridge when we get there, because delegates system is a money gameâ€. UK Agrees to a nomination process using delegates at Kasarani. The show of might at CORD signing ceremony required that they request for even a photo showing the 3 of them together.

Donâ€™t be cheated, Uhuru will win the nomination, because the only county pushing for Mudavadi is only Nyeri County led by the Othaya activist because they have always sidelined Murangâ€™a and Kiambu statehouse insiders like Kagwanja and so on, and now they are worried that an Uhuru Presidency would push them to the periphery.

The Nyeri Mafia wants a user friendly person in State House and no-one has an enviable track-record of being a puppet like Musalia Mudavadi. The dude is malleable, and can be manipulated. They would rather let the outriders go to Kavirondos than let the outriders to go past River Chania or is it River Mathioya, again!

The fight at Kasarani will come down to transporting and accommodating delegates, and that is how Uhuru will win. He has real estates in Nairobi enough to host all delegates including URP and UDF combined. He has the ability to make them arrive in Nairobi and be taken to a place that MM canâ€™t find them.

Every delegate knows that the chance to become a delegate is a golden opportunity to pocket a slice of UKâ€™s deep pockets. This is what MM is afraid of.

Uhuru the deep pocketed dollar millionaire is the only â€œman-enoughâ€ with the financial and political ability to mount a formidable challenge to Raila Odinga. His recent identification of an ideological inkling with the ICC and Hague based thinking makes him have some semblance of an ideology that can counter Odingaâ€™s well known reformist, democratic and visionary credentials.

Mudavadi is yet to find an ideological foothold of his own. He is still wandering in a miasma of ideological confusion. Mudavadi â€“ who is still ideologically in diapers, would be a piece of cake for Raila, and would just make the competition boring and subject us to another boring presidency, when we are just emerging from Emilioâ€™s monotonous boredom of hiyo hiyo tu.

An Odinga-Kenyatta duel would be a rematch mother of all battles. A Mudavadi candidacy would just hand the presidency to Raila Odinga on a silver platter. TNA should not give in to State House propaganda intended to deny Uhuru a chance to like Goliath be humiliated by CORDâ€™s smart strategy operation. Raila, the German trained Engineer, knows too well that efficiency is everything in a well oiled political machine like CORD.

That is why CORD is setting the 2013 agenda; including making UK consider surrendering outta the race for fear of misery and shame of losing. He has been there before in 2002, and once bitten twice shy.Â  Competing against Raila is traumatizing, ask Kibaki.- he had to rule together with Raila to be able to keep power.

At Kasarani not even the Othaya activist, or Nick WanjohiÂ  will pick Mudavadiâ€™s phones, not even State House can help the non-strategic and averagely wealthy Mudavadi pitted against the master-tactician Moi student and filthy rich Uhuru- heir to millions of acres, in which thousands of landless squatters work for free in exchange for a space to live. They will desert him to fry in his own fat.