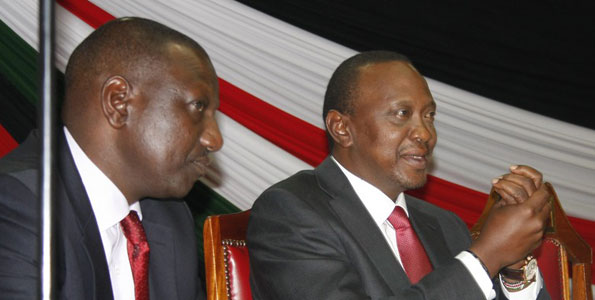 Uhuru recently made it clear that he will govern from the Palace on the Hill, not Harambee House as reported in the media http://www.nation.co.ke/News/politics/Kenyatta-to-govern-from-State-House/-/1064/1866536/-/qlsc9o/-/index.html.

This mind-game is the beginning of relegation of Ruto to his rightful place.

That Kimemia will be at Harambee House is symbolic. Uhuru effectively and symbolically elevates himself above Shell/Harambee House.

Ruto will soon be asked to share any concerns to his closest govt office, which would be Harambee house, whose occupant is Kimemia. Unlike Kibaki, UK is very sly, it takes years to know he is upto something fishy, he strikes at the opportune time.

Kimemia wittingly stationed Ruto at Shell, then Ruto thought they will work opposite- a walking distance from each other like Kibaki did, but Uhuru has chosen the palace. The message is clear, Uhuru wants some space away from Ruto.

Of course you donâ€™t expect Uhuru to drive to Harambee… mwenye haja ndiye huenda kuonana and I will teach you a thing or 2 about power mind games, if the DP is summoned to State House, just having to drive past UoN hostels through arboretum is demeaning, humiliating and embarrassing on his way to beg to see the President…. itâ€™s like a student being summoned to the Headmasterâ€™s officeâ€¦.. kuona mkubwa…first hit below the belt…

Ruto welcome to Kamwana’s Power games 101- itâ€™s called the slow bleed doctrine or slow punctureâ€¦.little subtle moves that arenâ€™t felt immediately but will begin to be felt a few months down the line- Which is unlike Kibakiâ€™s nusu mkeka right from day ONE. I see the same game but more refined.

Today, I leave you with Robert Greeneâ€™s Law No. 3, which Uhuru is obeying, thus â€œConceal your intentions: Keep people off-balance and in the dark by never revealing the purpose behind your actions. If they have no clue what you are up to, they cannot prepare a defense. Guide them far enough down the wrong path, envelope them in enough smoke, and by the time they realize your intentions, it will be too lateâ€.

Uhuruâ€™s actions also have the footprints of Law No 9, in the same book: â€œWin through your Actions: Never through Argument Any momentary triumph you think gained through argument is really a Pyrrhic victory: The resentment and ill will you stir up is stronger and lasts longer than any momentary change of opinion. It is much more powerful to get others to agree with you through your actions, without saying a word. Demonstrate, do not explicateâ€.

Ruto should demand Uhuru uses Harambee House instead of State House, so that they appear equal in power, as 2 co-equal partners governing side by side- good luck on that though!!