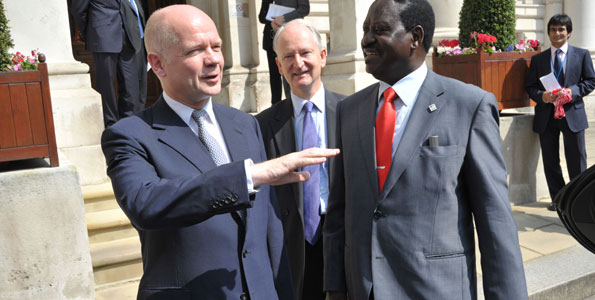 The Kenyan president, Uhuru Kenyatta, who faces charges of crimes against humanity at the international criminal court will attend a conference on Somali to be held in London. Word doing rounds among the Kenyan diaspora in London is that former Prime Minister Raila Odinga played a significant role in getting foreign office officials to allow Kenyatta to attend the conference.

Earlier the foreign office had maintained that Kenya should send a high level delegation, it was Raila who reminded them that at the moment president Kenyatta’s designated cabinet secretaries have not been approved by parliament yet, needless to note that permanent secretary Thuita Mwangi faces corruption allegation charges.

Odinga was in London Wednesday through Friday where among other things he attended the Times Africa Business Summit. In an Interview with the BBC Raila said he was not bitter with election petition judgment but disappointed.

The London trip will be President Kenyatta’s first trip to a western capital since his election in March. Britain and other countries said before his victory it would have only â€œessential contactsâ€ with him if he won because of the court case.

â€œKenya is a vital partner on Somalia and we judge our contact according to the issue concerned,â€ a spokesman for the Foreign Office said.

A source close to the president and a diplomat both said Kenyatta was likely to travel to the meeting, which aims to build support for Somalia. Kenya is an ally in the battle against Islamist militancy in the region and has sent 5,000 troops to Somalia as part of a western-backed African force that has driven back al-Shabaab fighters.

The charges against Kenyatta relate to post-election violence five years ago.

The British spokesman said the invitation was extended because he had committed to co-operating with the court in The Hague.https://www.kenya-today.com/