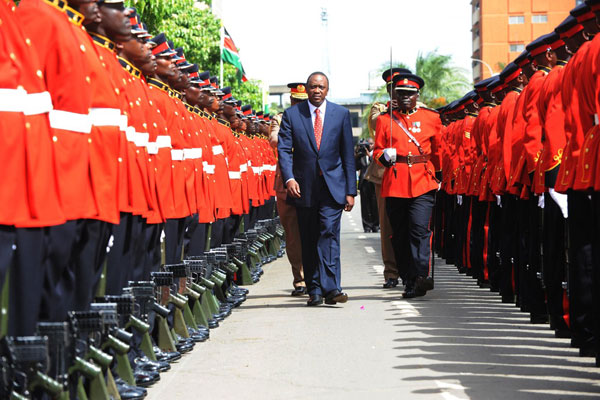 President Â Kenyatta has some weird political history in his chequered journey to the top.Â On November 18th, 2002, the son of Kenyaâ€™s first president was presenting his nomination papers at County Hall having walked from then KANU Headquarters at KICC, a distance of roughly 400 meters.

This would be his first stab at the presidency. In that walking entourage was Kenyaâ€™s second president, Daniel Arap Moi and the Vice-president, Musalia Mudavadi. Ironically, William Ruto, now deputy president, was present too as a cabinet minister. Even more startling in that walking crowd were the current ODM Chairman Henry Kosgey and FPK Boss Cyrus Jirongo (stalwarts of the defeated CORD Coalition).

Together with Yusuf Hajji, Katana Ngala, Masden Mardoka, Julius Sunkuli, Mohamed Maalim and Nicholas Biwott, these powerful cabinet ministers believed in the possible presidency of Uhuru Kenyatta. Whether their support was coerced or voluntary is a matter of conjecture. It will be edifying upon teachers and â€˜nobleâ€™ historians, not ethno-centrists like Prof Peter Kagwanja, to relook at the last decade and apportion it a place and time in the political chronology of happenstances in Kenya.

The events of that day, viewed a decade later presents arguably the most untold chapter of the Kenyan political story. It is also a story of the injuries and usurpations on and of the Kenyan press. For instance, the much hyped â€˜performanceâ€™ of deputy president William Ruto is only talked about after he joined cabinet through the power sharing agreement between Raila Odinga and Mwai Kibaki in 2007. Demand from his supporters any report-card while he served under Moi, or during his five year stint in opposition benches between 2002 and 2007; and before the referendum in 2005; the response would be rationally chilling.

Seated patiently at the KICC in front of then ECK Chairman, the late Samuel Kivuitu and Vice-Chair Kihara Mutu, president Moi waited as handlers of Uhuru frantically searched for the briefcase with his nomination papers. If loosing briefcases is anything to go by; the son of Jomo has had his fair share too!

When at last the briefcase was found, President Moi, with his voterâ€™s card and ID in hand, proposed Kenyatta for president, and was seconded, interestingly again, by Vice President Musalia Mudavadi!

There is a peculiar Kenyan political habit. The forgetfulness!

Kenyans forget so fast. It is this habit which has created an enduring place of status quoists to thrive even when institutions have been altered, or deemed so. Like a chameleon, they can turn into anything. They can be reformists per excellence, they can be fighters of corruption, they can be symbols of integrity and the rule of law; they can be the best performers in ministries, the judiciary, the legislature, the universities and even in the mosques and sacred pews of churches. Their mission is one: cage the sleeping dogs.

In his book Peeling Back the Mask, protest writer Miguna Miguna aptly captures this incongruity:

â€œThe retrograde are tenacious in the most perplexing ways; that their strength is often in the patience they exhibit.They know that no matter how intense, controversial or heated something is, when given time, it cools down. Time, our reactionary friends know, tames everything.

The most spiritual amongst them (did he mean William Ruto?) would say that â€œtime heals everythingâ€. They fight, then hunker down and wait, until they have worn you out.â€

Â And yes, they did wear many people out. Raila Odinga is no more. Gitobu Imanyara is no more; Anyangâ€™ Nyongâ€™o and James Orengo are fadingÂ  senators; Martha Karua is a grandmother,Â  Koigi wa Wamere breathes fire from the fringes, down and out; Yash Pal Ghai is no longer amicus curiae and Willy Mutunga, though the Chief Justice, is today a study in judicial tyranny.Â

We will never listen to Dr Okii Ombaka, Enock Magara, George Kapten Fr John Kaiser or Odhiambo Mbai again. So much water has passed under the bridge; and blood too!

So a decade later, we see a constellation of characters who shot to fame and wealth by sinking the fortunes of the country in the abyss of wastefulness, embezzlement, grabbing, looting, torturing, maiming, killing and cannibalizing.

The new state is tantalizing; it tickles students of history like this writer; it maims the collective psyche of believers of democratic ideals not as taught by Machiavelli.

We see the dawn of a leadership we saw (or so we thought) its dusk a decade ago. Because of our forgetfulness, we cheer on, blinded by changed circumstances; hopeful that the proceeds of the short-lived revolution, during which we sacrificed the captain of its struggle; rejected dissent and gave puppeteers of the dictatorial state a wider lease to roughshod over all, may remain within our reach. It is sad.