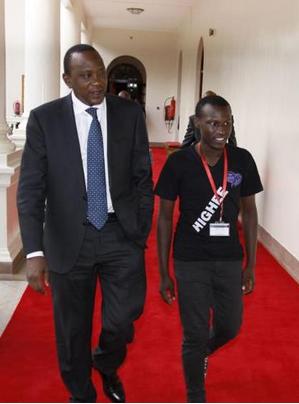 Unlike former President Kibaki who only got entertained and when the events ended went back inside Statehouse, President Kenyatta has offered to sponsor the student who narrated a comic verse to him recently at a statehouse gala party for secondary school students who performed exemplary in the just concluded drama festivals.

However, the boy was not alone. He was in a team with other equally poor boys who ensured he overcame both stage fright and added the valor to his performances. These boys were around four or five in number.

While the president did a good thing in taking up the education of the main actor, equally important is the supporting cast-the minor actors. A successful presentation of any form of art requires teamwork.

I would not be raising this issue if I did not understand how such minor details can open deep resentments among students who otherwise were the best of friends, regardless of their poverty level.

Even as the main actor enjoys his new found stardom, with a financial future somehow secured, let the celebrities and the president not forget the other boys.

Rather than just pick one actor in a cast which included so many, all probably in need, the new sponsors (some cashing in the publicity) should develop a system of taking care of other teammates.