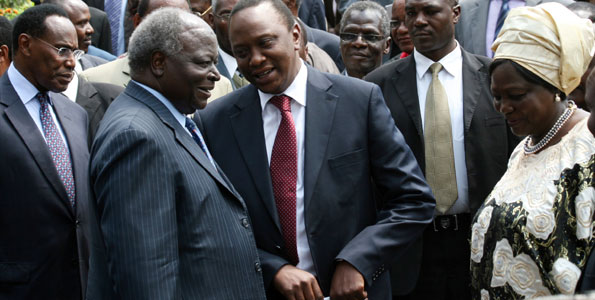 When President Mwai Kibaki appointed Kenyatta as Minister for Local Government on 8th January 2008 after an extremely controversial election exercise, it was not clear that the son of the first president of Kenya, Mzee Jomo Kenyatta, was destined for enormous responsibilities in the shadows of the President. However, on the mirror of history and power, it would be easy to see that it would be his springboard especially after fomer President D.T Moi nominated him to parliament in 2001 and appointed him a Cabinet Minister in the same docket before controversially proposing him for heir apparent where he vied for presidency for the first time in history.

Uhuruâ€™s golden doors went wide open again when Kibaki made him the Deputy Prime Minister and Minister for Trade in a coalition government formed between Kibaki and Raila Amolo Odinga in 17th April 2008. Raila became the Prime Minister in the leadership arrangement that was negotiated by African Union led by H.E Kofi Annan.

In the coalition, it was agreed that the partners share Cabinet in the middle. With the help of Francis Muthaura, it is believed that it was Uhuru who informed the Kibaki sideâ€™s allocation of slots to individuals. In the beginning, presence of stronger and more independent persons who included the Vice President Stephen Kalonzo Musyokaâ€™s members, Martha Karua, among others, eclipsed prominence of Uhuruâ€™s real influence. That was not until 23rd January 2009 when Amos Muhinga Kimunya resigned due to the Grand Regency Hotelâ€™s scandal. Kibaki handed over the office to Uhuru and the deal was done. Uhuru never served as an ordinary politician again. He and President became one; operating both in actual and shadow.

Apart from Naomi Namsi Shabaan, Sam Ongeri and Mohamed Yusuf Haji whom he fixed in from Kanu, Uhuru had a hand in almost entire PNU appointees who included Esther Murungi, Beth Mugo, Njeru Githae, Jamleck Kamau, etc. Even Ford Kenya members in the Cabinet like Moses Wetangula, Soita Shitanda and Noah Wekesa got their dockets via the shadow of his hands.

Since the back door through which Kalonzo joined Kibaki was crafted by Uhuru, his Cabinet allocations were negotiated in the formerâ€™s house in the capital city. In apparent bid to impress him, he gave Mutula Kilonzo Justice Cohesion and Constitutional Affairs from where he removed him for his new found Kibaki kid, Eugene Wamalwa. That was not all; he frustrated Karua and forced her out of the powerful docket for fear of competition. While Karua was ambitious, Kilonzo was actually principled; two of which traits Uhuru is at odd with.

Uhuru has used his hands on power to bring down his competitors at home-circuits. Apart from Karua, the Kipipiri MP Kimunya who earnestly indicated interests in presidency had to be relegated and silenced in several styles. Gatanga MP Peter Kenneth, the current aspirant on Kenda-Poa ticket remained pressed down as Assistant Minister in the Ministry of State for Planning, National Development and Vision 2030 even after showing immense ability in leadership and development. It was not clear how he would handle veteran politicians of the caliber of the late G. Kinuthia Saitoti. At his untimely death, the Kajiado North MP was the Minister for Internal Security and Provincial Administration; a docket that Moi exploited for manipulation of politics in Kenya. Uhuru gave this docket to his lieutenant, Katoo Ole Metito. That tells his deep interest and influence in running affairs of the government.

All diplomatic appointments and Permanent Secretary jobs on the Kibakiâ€™s divide of the coalition were directly overseen by the TNA-URP presidential candidate. That literally gave him upper hands over his peers who have typically turned to venerate him. He has controlled their states.

Apart from direct human influence in the top echelon of the government, Uhuru has managed allocation of funds to date. Even after 26th January, 2012 when the International Criminal Court forced him out of Finance Ministry, he still simply effectively directs funding by the government. It is common knowledge in the country that he decides which funds Robinson Njeru Githae releases at particular times. Alongside with the other powers, he does it for political reasons. Like he exercised the monopoly earlier when he could hold resettlement money for Mau Forest IDPs, the biometric voter registration, BVR, machines that delayed the start of registration process was seen as one of these interferences. He is doing this entirely free hand. The President is there to camouflage.

Use of State Machinery

Together with several decisions, except pending of signatures, the president has given Uhuru everything a king can give a son in who he bequeaths succession. With an open treasury, he has bought for him or helped him buy associates. That is in order to help him form a crowd with which he will form a government at the expiry of the current term. It is in the public domain how he helped him acquire his last wish of getting Wycliffe Musalia Mudavadi out of the ODM alongside accommodating William Kipchirichir Ruto. That was only easy because of the stable ground, the government. With it he is convinced that he can continue the legacy. That explains why partners in the coalition like Raila may move out and seek for firmer factors; pillars with stronger foundations. With it he balances the equation.

Uhuru and team have the government to lean on. They have the State Machinery to use and there is no reason for trying to hide it from Kenyans. It would only be proper to use the opportunity in promoting sanity other than confusions like they are doing in current electoral politics. Politicians will pass away but Kenya will remain. If you are favoured to have opportunities ahead of others, use it to help promote their welfares and do not try to finish them. That is how your position serves its usefulness in the society.